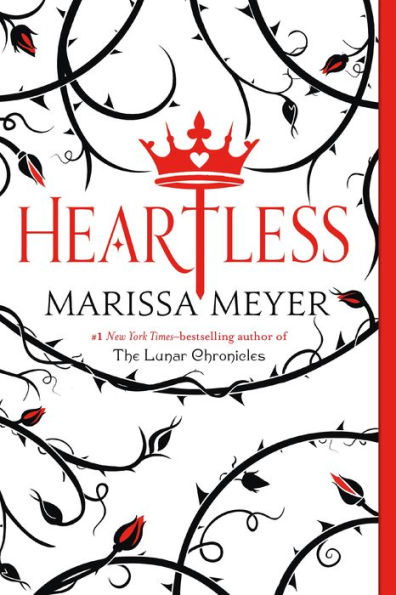 Other books by Marissa Meyer

“She would be queen and . . . queens did not open bakeries with their best friends. Queens did not gossip with half-invisible cats. Queens did not have dreams of yellow-eyed boys and wake up with lemon trees over their beds,” Catherine. –Heartless

Catherine may be one of the most desired girls in Wonderland and a favorite of the unmarried King, but her interests lie elsewhere. A talented baker, she wants to open a shop and create delectable pastries. But to her mother, such a goal is unthinkable for a woman who could be queen.

At a royal ball where Cath is expected to receive the King’s marriage proposal, she meets a handsome and mysterious jester called Jest. For the first time, she feels the pull of true attraction. At the risk of offending the King and infuriating her parents, she and Jest enter into a secret courtship. Catherine is determined to choose her own destiny. But in a land thriving with magic, madness, and monsters, fate has other plans.

Catherine’s sweet and fiery nature will have readers falling in love with her from the very start. Readers will empathize with her troubles. Catherine desperately wants to make her parents proud, so she often hides her feelings. Catherine wonders, “Was she so afraid to disappoint her parents and the King, that she was willing to put their happiness before her own?” To make matters worse, her domineering mother doesn’t listen even when Catherine tries to be honest, and her mother constantly harasses her about food. At one point, her mother takes away custard and says, “You’ll be mistaken for a walrus at the festival. . . You’ll become an elephant!”

Heartless takes the reader into the imaginative world of Heart, a reflection of the land in Alice in Wonderland—a place with walking cards, magical pumpkins, and hats that give hope. Even though the setting is magical, the story isn’t a sweet love story. Instead, Catherine’s transformation into the Queen of Hearts that we all know from Alice in Wonderland is heartbreaking. Throughout the story, Catherine’s good intentions repeatedly lead to disaster. It doesn’t matter if the characters acted out of love, the results are always disastrous.

If you’re looking for a cheerful Alice and Wonderland based story, Heartless is not the book for you. Heartless is an engaging story with complex characters and sensational surprises. Catherine’s story will have you reflecting on fate and wondering if people have the ability to choose their futures or if their futures are predetermined. Readers will either love or hate Heartless, but either way, the characters will stay with you a long time after you close the book.

Other books by Marissa Meyer

“She would be queen and . . . queens did not open bakeries with their best friends. Queens did not gossip with half-invisible cats. Queens did not have dreams of yellow-eyed boys and wake up with lemon trees over their beds,” Catherine. –Heartless