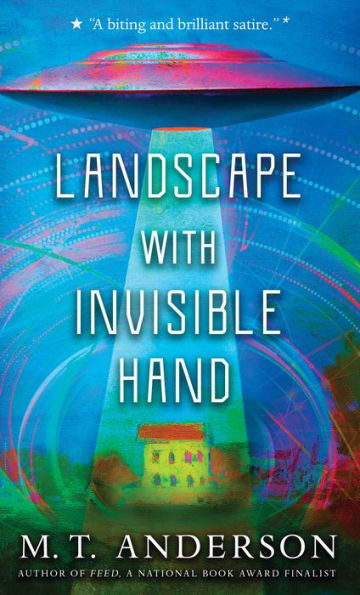 “We are tiny figures. Pointing at wonders, provided for scale, of lives of our own, surveying the landscape that has engulfed us all,” Adam Costello. –Landscape with Invisible Hand

After the first vuvv landed, everything was supposed to change for the better. With the promises of health and prosperity, humans greeted the technologically advanced alien race with open arms. But when Adam’s parents’ jobs are replaced by alien technology, Adam realizes that only the wealthy class is able to thrive. Earthlings start to go hungry as food, water, and medicine become scarce. Earth becomes a wasteland of diseases where the poor suffer, while the rich and vuvv in the skies live a life of luxury.

With no money and barely enough food to survive, Adam Costello—an 18-year-old American artist—must get creative. Adam and his girlfriend, Chloe, sign up for a 1950s style dating program where they record “traditional human love” for the vuvv to watch. The vuvv watch as Adam and Chloe fall in love and act out scenes, including dates. But as the money rolls in for their pay-per-view program and their subscriber count goes up, Adam and Chloe start to hate each other. After they break up, the vuvv threaten to sue them for promoting their “fake love.”

With the threat of a lawsuit and food running low, there is only one way out—a global youth art competition. After Adam’s art teacher, Mr. Dave Reilly, entered some of Adam’s artwork in a “traditional human” art contest, Adam makes the first cut and is invited to a huge party at a galleria where the winner will be announced. The winner will have everlasting fame and fortune with their art pieces sold throughout the universe. Will Adam win and move into the clouds or will he be stuck living on the desolate Earth forever?

In Landscape with Invisible Hand, Anderson draws many parallels between Adam’s art contest, the vuvv’s colonization, and social media. He asks the question: how much should we shape ourselves to fit the criteria of others? Adam constantly has to decide whether to become the type of human the vuvv want or stay true to himself. In the beginning, Adam desperately tries to fit the vuvv’s mold in order to survive. But as Adam’s health starts to deteriorate, Adam throws away this mold and submits “nontraditional” art to the vuvv contest, teaching readers to be themselves no matter what.

Even though at its core the book has a positive, self-empowering message, Landscape with Invisible Hand is intended for older readers. Reader’s hearts will be torn apart as nothing goes right for Adam’s family—food runs out, they can’t find a job, and Adam’s medical problems worsen. The story is extremely dark, saddening, and has no happy ending. The novel also makes many parallels with African colonization and enslavement with Adam’s situation. This motif will make it hard for some readers to understand the story’s true meaning. Along with the plot and themes, the novel’s sexual content and language is also intended for older readers. The character’s frequently “neck” and kiss, and Adam constantly cusses throughout his narration. Landscape with Invisible Hand contains a powerful message that can be used to start a conversation about our world’s self-identity crisis and social media.

“We are tiny figures. Pointing at wonders, provided for scale, of lives of our own, surveying the landscape that has engulfed us all,” Adam Costello. –Landscape with Invisible Hand