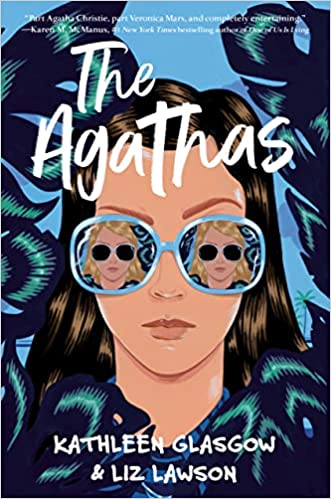 Last summer, Alice Ogilvie’s boyfriend Steve dumped her for her best friend. Then, Alice disappeared for five days. Alice was pretty, rich, and popular. But that all changed when she returned to school. Now Alice’s old friends hate her, and the rest of the school follows their lead and begins treating Alice like she doesn’t belong.

Then, Alice is paired with fellow classmate, Iris Adams, who agrees to tutor her. Iris is the opposite of Alice—she flies below the radar, she and her mom struggle to make ends meet, and she could care less about popularity. Despite this, Alice and Iris click almost instantly and their bond is strengthened by the untimely disappearance of Brooke Donovan—the very girl Alice’s boyfriend Steve dumped her for. Alice, a fan of mystery author Agatha Christie, and her newfound partner-in-crime, Iris, soon find themselves solving not calculus, but a murder case.

When Brooke’s body is found, Steve is arrested but Alice and Iris aren’t convinced that Steve is guilty. Both girls have different motives for solving this case. Alice hopes it can win back the favor of her ex-friends and restore her status as the town’s golden girl, while Iris hopes to obtain the hefty cash prize that comes along with solving the case. In order to get the reward and prove Steve’s innocence, the two teens need to figure out who actually killed Brooke. But the town of Castle Cove holds many secrets, and Alice and Iris have no idea how much danger they’re about to walk into.

Alice’s spunk and Agatha Christie obsession combine with Iris’s ingenuity and resilience to make a frightening yet captivating pair. Alice and Iris must navigate their oblivious teachers and parents, as well as work around an inept police force. At some points, it seems as if everyone is working against them, and readers will find it near impossible to put down the book while reading about how they handle it. The book switches between Alice’s and Iris’s perspectives. Both girls are fun and interesting characters. The reader will experience first hand how the girls interact with each other as well as how they perceive and feel about each other internally.

Throughout The Agathas, Alice slowly learns what it means to truly have someone on her side. In meeting Iris, Alice finally feels like she has someone she can trust. On the other hand, Iris is carefully navigating a difficult domestic abuse situation at home, struggling with money issues as well as her father’s physical, verbal, and emotional abuse. Despite having a restraining order, Iris’s father still bothers her in person and through text messages. In dealing with her dad and supporting her mom, Iris learns to trust herself and hones her ability to help her and her mother get away from their abuser and lead their own lives.

Alice and Iris navigate small-town scandal, school, and tumultuous personal lives, creating a thrilling, yet realistic adventure from cover to cover. For a murder mystery, there is a surprising absence of violence and gore, which makes for a wonderfully plot-dependent book instead of a story that relies on shock factor. Though the dramas of high school are largely exaggerated and the absence of parental supervision is unrealistic, The Agathas is an interesting read, featuring the perfect mix of drama, scandal, and the dark and intriguing side of mystery. Mystery fans who want a fast-paced story that shows the dangers of bullying should also read the Jess Tennant Mysteries Series by Jane Casey.