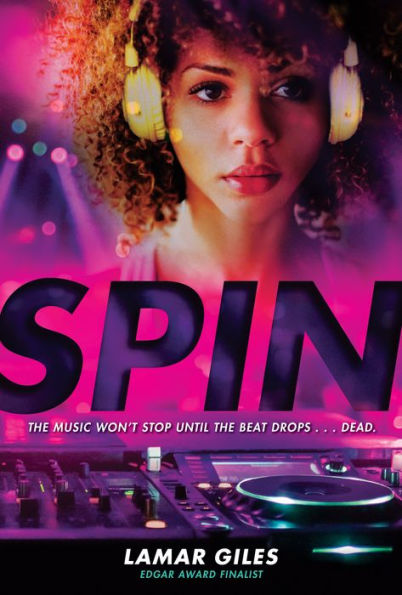 “I did not kill Paris Secord. Had absolutely nothing to do with her death. Could all her so-called friends say the same?” Fuse. —Spin

Spin centers around the murder of Paris Secord, an up-and-coming musician whose stage name was DJ ParSec. After finding fame and fortune on SoundCloud and YouTube, Paris begins to clash with some of the friends who helped her on her way to the top. When Paris is found dead on top of her signature turntables, her childhood best friend Kya and social media guru Fatimah (“Fuse”) find themselves suspects in the investigation. To clear their name, they set out to solve the murder themselves.

Kya and Fuse are the two main narrators of the story, which switches between their first-person perspectives. As Kya and Fuse delve deeper into Paris’s past, they must come to terms with the bitter fallings-out they had with Paris before she died. While Kya and Fuse start as enemies, they soon bond in their shared efforts to bring justice to Paris. As they investigate, the two encounter a conspiracy involving crazed fans who will do anything to prove themselves loyal members of the ParSec Nation. As Kya and Fuse unravel the mystery, some chapters flash back to Paris’s perspective, which reveals crucial details and reveals how she coped with fame.

Spin is a fast-paced mystery that introduces readers to music industry concepts, such as ill-intentioned managers and nosy journalists. The story honestly portrays contemporary music culture and rabid fandom. While some of this portrayal comes across as well-researched and genuine, other parts feel forced. Readers might find the narrative’s dialects and buzzwords unnatural. For example, the book often shows tweets from rabid fans, but the style and syntax of the tweets is disingenuous and awkward.

Spin succeeds in its earnest portrayal of class tensions. Kya, Fuse, and Paris all must deal with their families’ financial situations and how their circumstances have shaped their worldviews. For example, Paris set up a bank account for her newfound wealth while trying to keep her grandmother from being evicted. “I learned quickly,” Paris says, “that black-folks rich and rich-rich aren’t the same thing.”

Spin delivers no central lesson about racial injustice. However, Spin is a diverse story set across a backdrop that shows readers how black music and culture evolve. From seeing Paris in the studio to seeing her fans’ blogs and bedrooms, readers will get a close-up look of how people of color influence and lead in the music scene. Readers will also see the anxieties Kya and Fuse experience while dealing with the police, because they are wary that, as people of color, they may become victims of police brutality.

Overall, Spin feels fairly one-dimensional, and readers may guess the ending before the murderer is revealed. The story is strongest in its theme of friendship, and readers will enjoy seeing Kya and Fuse bond as they begin to heal from Paris’s death. Equally important is the way art and culture bring people together, even as fame pushes artists to their breaking points.

“I did not kill Paris Secord. Had absolutely nothing to do with her death. Could all her so-called friends say the same?” Fuse. —Spin