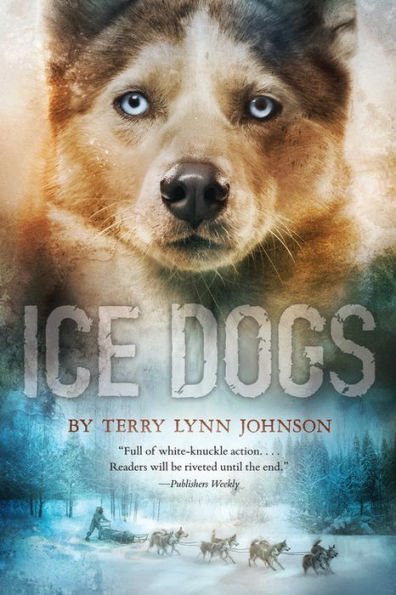 “We shouldn’t try to deal with things on our own, okay? We’ve still got each other, let’s not forget that,” Mom. –Ice Dogs

Her father’s death could have been avoided. That’s what fourteen-year-old Victoria Secord believes. If she had been with him, he would still be alive. Now that her father is dead, Victoria wonders if her mother is going to force her to leave Alaska. After all, her mother never understood her or her father’s love of dogsledding.

Thanks to her father, Victoria is an expert dogsledder. He taught her how to be independent and self-reliant, even in Alaska’s wintery bush. When Victoria finds an injured city boy, Chris, she doesn’t think twice about helping him. The two are soon lost in a fierce snowstorm. It’s up to Victoria and her dog team to keep everyone alive. Stuck in a frozen wilderness, Victoria doesn’t have enough food for her or her dogs. With temperatures dropping, how can Victoria keep everyone alive?

Ice Dogs takes the reader on a winter journey through the icy Alaskan wilderness. Although the plot is somewhat predictable, Victoria’s personal struggles add an interesting twist. Victoria is struggling with the death of her father, which has caused friction between her and her mother. However, her father’s death isn’t the only conflict that moves the plot along.

Victoria is unexpectedly responsible for Chris’s life. The injured city boy doesn’t know anything about surviving in the Alaskan wilderness. Freezing temperatures, lack of food, and wild animals are only some of the obstacles they will have to overcome. The two must also find a way to get along if they are going to survive. As the two fight to stay alive, they build a friendship as well as grow as individuals. Victoria and Chris are both unique, interesting characters that readers will relate to.

Ice Dogs is a fast-paced survival story that shows Victoria’s determination to keep her dogs and an injured boy alive. Faced with difficult situations, Victoria reflects on her father’s teachings; this allows her to endure each obstacle. Through the story, Victoria comes to realize that no one is to blame for her father’s death. Even though Ice Dogs has some predictable plot points, readers will enjoy Victoria’s relationship with her dogs as well as the interplay between Victoria and Chris. Full of adventure and danger, Ice Dogs highlights the importance of communication and relying on others. Middle school readers who enjoy Ice Dogs may also want to read Johnson’s other book, Dog Driven, as well as Survival Tails: Endurance in Antarctica by Katrina Charman.

“We shouldn’t try to deal with things on our own, okay? We’ve still got each other, let’s not forget that,” Mom. –Ice Dogs