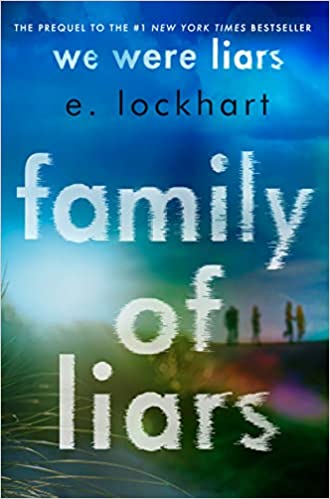 “Telling this story will be painful. In fact, I do not know if I can tell it truthfully, though I’ll try. I have been a liar all my life, you see. It’s not uncommon in our family,” Carrie. —Family of Liars

Prequel to We Were Liars

Caroline Lenox Taft “Carrie” Sinclair is the eldest of four daughters. Her prestigious old-money family, the Sinclairs, spend their summers on their private east coast island. As a family, they follow certain rules: “We keep a stiff upper lip. We make the best of things. We look toward the future.” This does not change when the youngest sister, Rosemary, drowns.

The summer after, seventeen-year-old Carrie goes back to the island where she sees her lost sister. However, Rosemary’s ghost is not the only surprise the summer will bring.

Newly confident from surgery that has left her with a chin that is “set forward” and an addiction to painkillers, Carrie is more than ready for love. Carrie discovers that her cousin Yardley has brought along three boys. One of the boys, Pfeff, captures Carrie’s attention right away. Irresistible and unpredictable, Pfeff changes everything for Carrie.  A summer of passion, long-buried secrets, betrayal, and terrible mistakes has only just begun.

In Family of Liars, Carrie is the narrator, who is vividly fleshed out. The story is framed as Carrie telling it to the ghost of her son, Johnny, who died in a fire in We Were Liars. Carrie admits that she is unreliable, so the reader is kept on their toes and will be questioning things until the full truth is revealed. For a portion of the book, readers will feel sympathetic towards Carrie because she begins her story amid a loss, and she spends time reminiscing over the long-ago loss of her sister. By the end, Carrie is not exactly likable, but she is interesting, and the reader will have a good grasp of who she is.

Unfortunately, the story has several flaws. First, most of the other characters feel flat. There are so many of them, and some exit the story for long periods and reappear unceremoniously. The large cast of characters will force the reader to pay close attention to who’s who. In addition, certain plotlines feel unnecessary. In particular, the haunting that Carrie experiences does little for the story aside from showcasing her relationship with her deceased sister. The reader might expect a twist or revelation regarding Rosemary’s death, but there is none to be found.

Despite its flaws, Family of Liars is still gripping enough to forgive most of the book’s shortcomings. The pacing has little twists and turns occurring throughout the story rather than a slow burn to a revelation at the end. The book can be understood without having read its predecessor, but it should be noted that the famous twist of We Were Liars is spoiled on the first page of Family of Liars. If a reader intends to read both books, We Were Liars should be read first.

Family of Liars is nevertheless a gripping read that fans of We Were Liars are sure to enjoy. Lockhart’s writing style and storytelling ability are captivating and easy to get sucked into. Readers will not find it hard to get invested in the complicated Sinclair family.

“Telling this story will be painful. In fact, I do not know if I can tell it truthfully, though I’ll try. I have been a liar all my life, you see. It’s not uncommon in our family,” Carrie. —Family of Liars