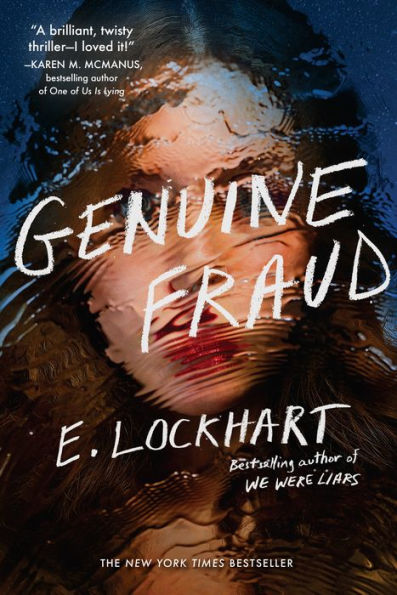 “She believed that the way you speak is often more important than anything you have to say,” Jule. –Genuine Fraud

Imogen, the heiress of a wealthy New York family, has run away from her responsibilities to her family’s mansion on Martha’s vineyard. Jule is her best friend…or so she thinks. Jule is a social chameleon, becoming whoever she wants to be and getting rid of whoever is in her way. But does that include Imogen?

Told backward, Genuine Fraud tells the story of two girls and their intertwining fates as they navigate the adult world that they long to be a part of. However, this is no charming tale of growing up and friendship, but a dark thriller that takes the reader on mysterious twists and turns. The reader never knows who to trust as they delve deeper into the story. At the end of the story, the reader is confused by questions that are never truly answered.

Although the Genuine Fraud has an exciting premise, the story never quite lives up to the promised thrill. Instead of ending with a narrative payoff, the plot feels like it traveled in a circle. Because the main mystery isn’t solved, it doesn’t really matter what happens in between. At the end of the book, there are so many questions that were not answered that the reader will be left wondering why they suffered through to the end.

Fans of We Were Liars will be disappointed with the lack of charm and relatability of all of the characters. Both Jule and Imogen are not sympathetic figures, and they never connect with the audience. Although Imogen is constantly presented as “fun” and “bubbly,” she comes across as a spoiled rich girl running away from minor problems. Instead of creating unique characters, the characterization relies on overdone tropes and stereotypes.

This book is not suitable for younger readers as it is a thriller that uses a fair amount of profanity and violence. The main character Jule is constantly using brute force to get what she wants. This enables several disturbingly gory scenes that may be too much even for older audiences. These factors, combined with a plot that fails to fully draw the reader in, contribute to the overwhelmingly disappointing nature of Genuine Fraud.

“She believed that the way you speak is often more important than anything you have to say,” Jule. –Genuine Fraud