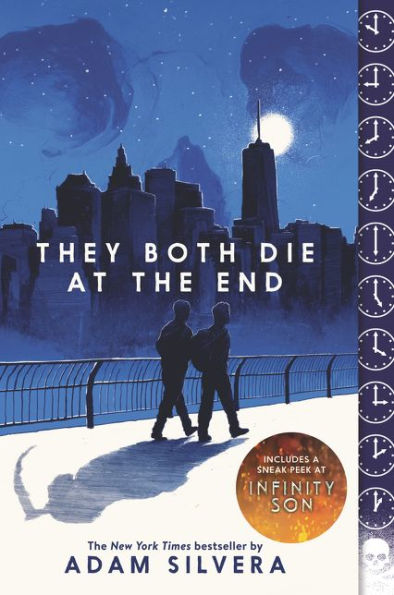 Mateo Torrez and Rufus Emeterio both receive a call from Death-Cast at around midnight on September 5, 2017. Death-Cast tells them that they will die sometime in the next 24 hours.

Until that day, the boys had nothing in common. Mateo has spent his life inside, fearing the day he gets the call and doing everything he can to avoid bringing it about early. Rufus, on the other hand, has seen death up close and personal. After losing his family in a car accident, he has vowed to live every day to the fullest.

Their paths cross when they each download the app Last Friend, designed to give people a chance to connect with someone on their End Day. The novel follows the boys as they try to make each final moment count, and learn to balance healthy fear with the pursuit of feeling truly alive one last time.

The spoilers are in the title, but knowing the ending makes the reading journey more valuable. The audience is given happy moments, not a happy ending. Readers must grapple with their own mortality and ask whether they have been living more like Mateo or Rufus. For these reasons, the book is recommended for older teenaged readers. While the message is valuable, it is at times difficult to confront, so readers should approach the book with caution. They Both Die in the End addresses death, illness, difficult upbringings, terrorism, spirituality, suicide, and first loves.

The story alternates between the first-person perspectives of Rufus and Mateo as well as a third-person view of characters whose stories intertwine with theirs. As their lives intertwine, characters who may seem unrelated at first, find themselves deeply affected by the boys. This unifies the plot and allows Silvera to explore a diverse collection of characters and their relationships with death without becoming too unfocused. Despite the sadness of a short life, the collective experiences of Rufus and, more particularly, Mateo, leave readers with the hope that though the boys may not have lived long lives, they each lived fully on their final days.