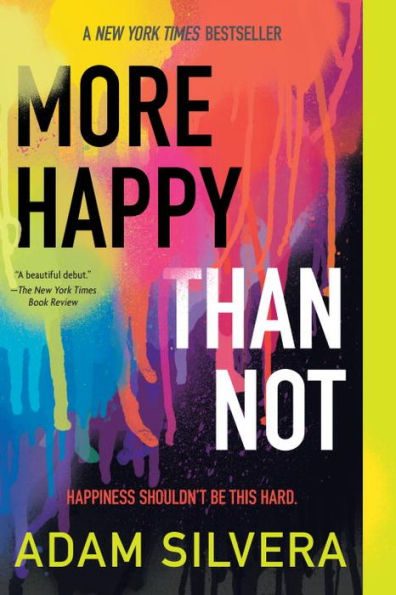 “I have to push ahead with the people who don’t take the easy way out, who love me enough to stay alive even when life sucks,” Aaron. –More Happy Than Not

Aaron struggles with his father’s seemingly meaningless suicide and his own attempted suicide. Through the process of coming to terms with his losses, Aaron leans on the support of his mother, brother, girlfriend, and friends. He has been with his girlfriend, Genevieve, since before his father’s suicide and she supported him after his own suicide attempt, solidifying her role as a central part of Aaron’s support system. Then, Aaron meets a boy from a nearby neighborhood, Thomas, who changes his entire life as he begins to fall in love with him.

Since Aaron can’t stay away from Thomas or turn off his newfound feelings for him, he considers turning to the Leteo Institute’s revolutionary memory-alteration procedure to straighten himself out, even if it means forgetting who he truly is.

More Happy Than Not follows Aaron’s journey of meeting a boy who changes his life in a way he has never experienced before. The story is told from Aaron’s perspective which allows the reader to understand Aaron’s internal struggles as he grapples with his sexuality. The reader follows Aaron’s feelings for his perfect girlfriend, which become complicated with his potential feelings for a new boy, Thomas. Aaron struggles with this internal battle of sexuality, his love and care for others, and internalized homophobia.

Following his regained memories, Aaron is upset that the Leteo procedure did not “fix” his sexuality. He confides in Genevieve, who reveals she was aware of his previous relationship a boy, and had helped him through the Leteo procedure in the hopes that it would help him love her the way she loved him. With the return of painful memories and a rejection by Thomas, the novel ends with Aaron considering whether or not he should undergo an additional Leteo procedure to take the pain away.

This raw novel highlights struggles of sexual identity, mental illness, suicide, grief, homophobia, and hate crimes. Aaron is a likable character with challenges that may be relatable to LGBTQ+ readers. More Happy Than Not is an engaging, suspenseful story that is difficult to put down. Yet Aaron’s experiences may be painful for some readers, especially those who have not yet come out. However, it is important that this story be told for LGBTQ+ youth who have faced discrimination as Aaron’s experiences explore how to move forward after painful experiences.

This sensitive and gruesomely realistic novel takes the reader on a journey of understanding Aaron’s inner conflicts. In the end, Aaron learns an important lesson and he decides, “I will do my best to always find the sun in the darkness because my life isn’t one sad ending – it’s a series of endless happy beginnings.”

“I have to push ahead with the people who don’t take the easy way out, who love me enough to stay alive even when life sucks,” Aaron. –More Happy Than Not