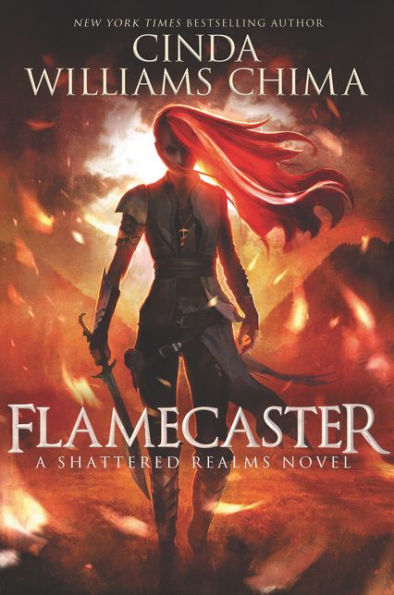 “But people—we act like we do. We write that bad ending before we even get there,” Jenna. —Flamecaster

Set in the world of Chima’s critically acclaimed Seven Realms series, Flamecaster is the beginning of an exciting new series full of suspense, magic, love, and danger. War has overtaken the realm, leaving two young, yet determined characters on their own in their fight against the cruel king of Arden.

Ash wants nothing more than to get back at the king that murdered his father. But after he’s forced into hiding, that goal only gets farther out of reach. Once he gets close to his father’s murderer, will he succeed in getting revenge? Or will he sacrifice his life for nothing?

Ash isn’t alone in his hunt for revenge. For as long as she’s known, Jenna Bandelow has had a strange magemark on the back of her neck. When the King’s Guard begins hunting for a girl with a mark like hers, Jenna must figure out why she’s being hunted. Does it simply have to do with the fact she’s been fighting against the king of Arden? Or is it something more? Danger lurks around every corner, and Ash and Jenna will need each other if they are to survive.

Flamecaster, a fantastic first book in the Shattered Realms Series, follows Ash’s and Jenna’s quest to take down the ruthless King Gerard. The engaging story is full of wizards, intrigue, revenge, and multifaceted characters. Both Ash and Jenna are interesting, complex characters who become King Gerard’s victims and lose those they love. Told from both Ash’s and Jenna’s point of view, it’s easy to understand each of their motivations as they grow and become obsessed with killing King Gerard. Both are angry and hateful after King Gerard kills people they love, which fuels their desire for revenge. While working towards their ultimate goal, each finds themselves alone, yet determined. Flamecaster weaves a compelling mystery, but doesn’t conclude with a typical resolution. Instead, some of the story arc is left with unanswered questions which will leave the reader eager to read the next book in the series, Shadowcaster.

Chima’s expert storytelling allows the story to unfold gradually and with humor. Even though the story pairs Ash and Jenna as lovers, the focus remains on survival and intrigue. Another positive aspect of Flamecaster is the world-building, which builds on the previous series, the Seven Realms series. This is constantly in the background, as the war personally impacts both Ash and Jenna. Through the war, religious and cultural differences between the two nations emerge. This highlights how in the Fells wizards are free and help rule over the Queendom, yet in Arden wizards are enslaved and distrusted. Overall, the backdrop serves well to push the story forward.

The theme of revenge is prevalent, as both Ash and Jenna are fueled by their desire to get revenge against King Gerard. Luckily this theme isn’t overbearing, and is paired well with the theme of hope. The universal theme of hope wins out in the end, as Ash and Jenna learn to overcome their doubts and survive their time in Arden. Flamecaster is both fast paced and engaging, a story that will entertain both Chimas’s loyal fans as well as readers new to the fantasy series.

“But people—we act like we do. We write that bad ending before we even get there,” Jenna. —Flamecaster