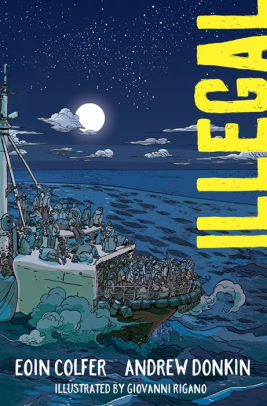 “Every day I watch the sea. After three weeks I can tell by the weather if the new arrivals will survive or not. Many survive. Many don’t. I will never forget,” says Ebo –Illegals

One day Ebo finds that his older brother, Kwame, has left their village in Libya to make the journey to Europe. Soon afterward, Ebo decides he must go after him. Ebo clings to the hope of finding a better life and reuniting with his family.

Ebo’s journey to find his brother is fraught with danger. He faces the possibility of death at every turn.  He often turns to the gift of song to provide comfort for himself and those he meets. He is told by a bus driver, “Ebo, you can’t solve everything with a song.” However, his lullaby calms a baby on the bus and, as a thank you from the driver, earns him passage to Agadez, the next stop on his journey. In fact, it is his song that guides Kwame back to him. When a woman needs a last-minute replacement wedding singer, Ebo steps in. When Kwame hears the voice, he follows it, leading him to Ebo. Ebo’s refusal to stop singing, even in the face of difficulty, and his willingness to help those around him emphasizes the message of perseverance and hope despite all odds being against him.

Throughout his journey to Italy, Ebo encounters many people who offer him aid which develops the theme of kindness and respect for others. After their raft capsizes, Ebo and his friends are saved. Ebo tells readers, “People are so kind . . . Although they hardly have anything, people give us blankets.” For every person who mistreats Ebo, there is another who helps him. These moments show that although not everyone is welcoming and kind, there are still those who help. As Ebo says, “They must help us. We are people.”

Family and friendship are driving forces in Ebo’s story. Even when his “new life” is bleak, Ebo maintains hope that his hard work, kindness, and strength of conviction will result in a better life. His commitment to his family and his new friends gives Ebo purpose. The brothers are finally reunited and in the end, Kwame even urges rescuers to save Ebo before helping himself, which ultimately leads to his death. Kwame sacrifices himself for his brother’s well-being.

Accompanying the powerful storytelling, Giovanni Rigano’s illustrations strikingly capture the characters’ emotions. Some pages of the story are told only through his illustrations, such as when Ebo is alone and not speaking. For example, in the refugee camp, the images show Ebo who is haunted by the death of his brother. The full-color illustrations are occasionally grim. One such picture is of a decomposed dead man. Other images of death are less graphic, and many deaths occur off-page. Many die from drownings and they’re shown disappearing into the water.

Some pages feature word boxes and speech bubbles to distinguish between narration and dialogue. Ebo’s narration is provided in pale yellow word boxes, while speech amongst characters uses white bubbles. Differentiation between past and present, as well as certain contextual details and unpictured dialogue, takes the form of light blue boxes. Each page has 9 to 16 short sentences. The text along with Rigano’s illustration makes the graphic novel easy to follow.

Twelve-year-old Ebo’s youthful spirit makes him a convicting narrator. His story is both tragic and hopeful. However, Ebo’s story shows moments of hope and how familial love can help ease the pain of loss and grief. Older children can learn a lot from hearing an immigration story from the voice of a peer. Readers will gain compassion for refugees when they are shown what children their age have faced. Despite the suggested age range of 10+, younger readers may find the deaths along the journey disturbing. Readers who would like to explore the topic of refugees further should read Refugee 87 by Ele Fountain and the graphic novel When Stars Are Scattered by Victoria Jamieson & Omar Mohamed.

“Every day I watch the sea. After three weeks I can tell by the weather if the new arrivals will survive or not. Many survive. Many don’t. I will never forget,” says Ebo –Illegals