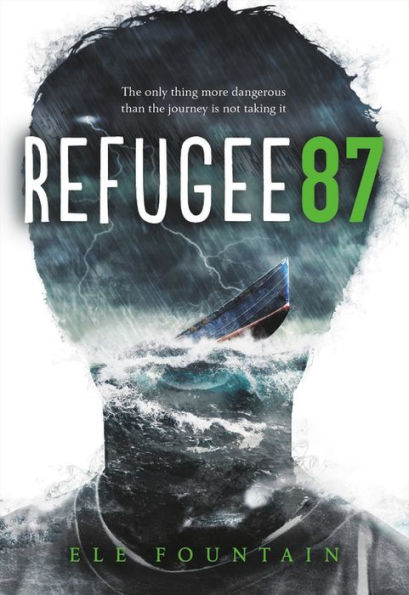 “It feels as if the course of my life, which had seemed so certain, is shifting like sand beneath my feet and might just suck me under,” Shif. –Refugee 87

Shif has a happy life, unfamiliar with the horrors of his country’s regime. He is one of the smartest boys in school, and feels safe and loved in the home he shares with his mother and little sister, right next door to his best friend, Bini. Both boys dream of going to university. Bini hopes to be a doctor and Shif wants to be an architect.

Both boys’ dreams are shattered the day that soldiers arrive at their door. Soldiers accuse the fourteen-year-olds of trying to flee before they can be drafted into the military. The boys are sent to prison, where they discover the lengths the government will go to silence anyone who is seen as a possible threat. Shif and Bini’s only hope is to escape the prison, sneak across the desert, and enter another country.

Told from Shif’s point of view, Refugee 87 jumps into a hostile country where people face unthinkable cruelty at the hands of their government. Shif and the other prisoners are treated like worthless animals and are given little food. However, once Shif escapes from prison, he discovers many unexpected dangers. A woman tells Shif not to go to the refugee camps because “a tribe in this area kidnaps people who have escaped from our country. . . They have gangs who patrol the camps, waiting for anyone new. Children get good prices. . . Before selling you, they try to get hold of your family’s money.”

Readers will sympathize with Shif as they learn about the modern refugee crisis. Instead of delving into the political situation, Fountain keeps the setting vague and brings Shif’s hardships to life. Even though the story is told from Shif’s point of view, readers may find it difficult to believe that Shif did not understand the reason his mother was so cautious and the dangers people in his country faced. The easy-to-read story doesn’t waste words on detailed descriptions, which sets the fast pace of the story. However, the lack of detail leaves the reader with unanswered questions.

Even though the publisher recommends the story for children eight and older, younger readers may become upset by the story’s mature themes which include war, violence, death, and human slavery. Although the events in the story are not described in graphic detail, Shif faces the death of his best friend and other horrific treatment. The abrupt ending may frustrate readers because the conclusion does not tell readers if Shif eventually made it to the safety of Europe.

As realistic fiction, Refugee 87 will help readers understand why people flee war-torn countries and the dangers that refugees face. The story also touches on themes of friendship, endurance, and the predatory nature of humans. Refugee 87 explores the refugee crisis in a manner that is appropriate for younger audiences and will engage readers of all ages. Readers who enjoyed Refugee 87 or want to learn more about refugees should also read Refugee by Alan Gratz.

“It feels as if the course of my life, which had seemed so certain, is shifting like sand beneath my feet and might just suck me under,” Shif. –Refugee 87