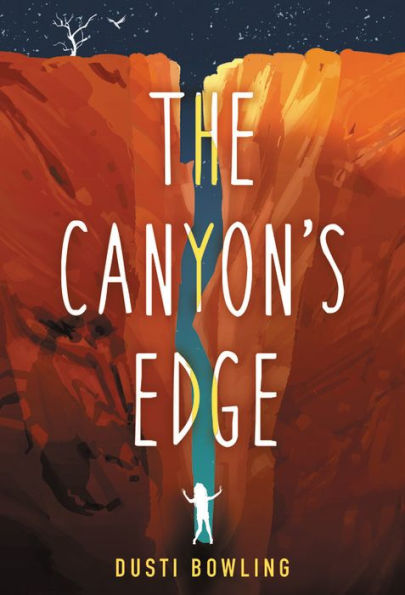 Nora’s birthday marks the one-year anniversary of the worst day of her life. To distract them both from the memories of a horrible mass shooting that killed Nora’s mom, her dad surprises her with a trip to explore a slot canyon deep in the Arizona desert. Nora hopes they’ll find some remnants of the happiness they felt when her mother was alive.

But in the twisting, winding depths, the unthinkable happens. Suddenly Nora finds herself lost and alone, at the bottom of a canyon, in the middle of a desert. Separated from her supplies, she faces dehydration, venomous scorpions, deadly snakes, and worst of all, the Beast who has terrorized her dreams for the last year. To save herself and her father, Nora must conquer her fears—and outsmart the canyon’s dangers.

The middle part of Nora’s story is told through poetry that uses repetition, alliteration, and other types of figurative langue to convey Nora’s emotions. Nora’s fear of “the Beast” becomes apparent as she imagines the man who killed her mother. “Now I feel the Beast below me, / sneering, sniping, snapping/ his snarling mouth / his claws outstretched, / waiting, patiently waiting, / for me to fall.” The poetry has an emotional impact and also creates a sense of panic, suspense, and fear.

The poetry creates wonderfully descriptive passages and the text often is placed to create a visual element that enhances the story’s emotion. For example, when a flash flood takes Nora’s father, the descriptive words are placed in the form of a whirlpool. The visual effect of the words helps the reader imagine the story’s events and the emotion behind them.

Nora’s story begins with Nora and her father building protective walls around themselves in order to shut out all other people. Nora suffers from post-traumatic stress disorder, nightmares, and loneliness. Even though Nora struggles with understanding why her mother died, the story never explains why a man killed strangers. Yet the terrifying events in the canyon allow Nora to deal with her past and her story ends on a hopeful note as she begins to heal.

Even though the story uses Nora’s stream-of-consciousness narration, The Canyon’s Edge is not a character-driven story. Instead, the story focuses on 48 hours of heart-stopping tension as Nora fights to survive scorpions, dehydration, and other dangers. Nora’s emotional trauma, the death of her mother, and the life-and-death struggle she faces may upset younger readers, but will be enjoyed by older readers. The Canyon’s Edge will take readers on a twisting emotional ride that will stay with them for a long time after they put the book down.