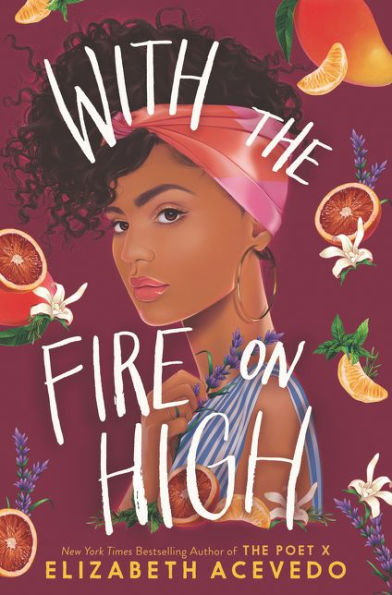 “What better way to take a leap of faith than to set something on fire and trust it will not only come out right, but that it will be completely delicious?” Emoni Santiago. –With the Fire on High

With the Fire on High

Emoni, a Philadelphia teenager, has aspirations of being a chef. Through her cooking, she is able to explore her identity as an African-American, as well as her Puerto Rican ancestry. Emoni’s family also forms a central role in her life. Her dad is a Puerto Rican activist and community organizer, but he is often absent. Emoni lives with her Puerto Rican abuela and her two-year-old daughter, who she conceived during her first year of high school. Now a senior, Emoni is learning to juggle her family, her academics, her personal life, her job, and her love of cooking.

At the beginning of the school year, Emoni learns that her school is introducing a culinary arts class. She is unsure if she will be able to balance it with her other commitments, and has a hard time warming up to the chef who teaches the class. Though they get off to a rough start, the chef soon becomes an important mentor for Emoni. She learns the importance of following directions in the kitchen, which is a place where she is used to doing whatever she wants.

Meanwhile, Emoni meets Malachi, a new student. She is hesitant to become friends, but they soon become close. Malachi becomes Emoni’s romantic interest. He is a sensitive boy who respects and cares for Emoni. Their relationship develops slowly through the course of the book. Malachi courts Emoni by showing that he is willing to accommodate her family situation: he is respectful towards her abuela and daughter.

With the Fire on High is heartfelt and expertly written. Readers will relate to Emoni’s struggle to decide whether she will go to college, and what shape her future will take. Readers will quickly find themselves rooting for Emoni and her family. They will cheer at her victories and feel distressed at her losses. The first-person narration paints a vivid picture of Emoni’s culture, her family, her personality, and how food plays an emotional role in her life.

With the Fire on High has mature themes and sexual content, but it is handled maturely. Sex is not glorified or demonized. When Emoni and Malachi become intimate, they do so because both of them feel emotionally ready. Emoni also struggles with the decision to date because of her many responsibilities. Emoni only brings Malachi around her child when she is certain that he’ll be a good influence.

With the Fire on High uses a unique character voice and vivid descriptions of food to draw the readers into the setting. The description of every character is strong, but especially Emoni’s. Her stubborn personality, her love for her daughter, and her unique narration all help her to come alive on the page. Readers will be able to relate to some piece of Emoni, but she is, by and large, her own distinct personality. The lessons she learns throughout the story will resonate with any reader. This is a coming-of-age story, and Emoni’s maturity is marked by her ability to make choices that will let her support her family while still caring for herself.

“What better way to take a leap of faith than to set something on fire and trust it will not only come out right, but that it will be completely delicious?” Emoni Santiago. –With the Fire on High