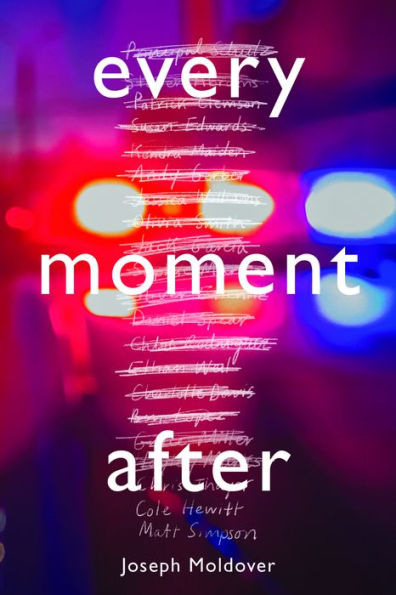 “My mom said it wasn’t my time. Like, I was meant to live so that I could do something good. That’s why I’m gonna be a teacher, to do something good in the world,” Luther. –Every Moment After

After the gunshots were silenced. After the victims were buried. After the place of terror was torn down. Eleven years after the tragedy, survivors still grapple with the effects. Recent high school graduates Matt and Cole still deal with the guilt and questions. Everywhere they go, there are reminders of those who died. It is impossible for them not to ask, why didn’t I die? How can I move on?

Matt was not at school on the fateful day that his classmates were massacred. The fact that he was spared from witnessing the events has caused guilt to consume him. Matt obsesses over what would have happened if he had been at school that day. Did he cheat death? Was he actually meant to die? Caught in a downward spiral, Matt’s rash actions temp fate to take his life.

Meanwhile, after the shooting, Cole became the face of the tragedy because a photo of him being carried from the scene went viral. Cole would prefer to hide in the shadows, but now everyone recognizes his face. When people ask him about the shooting, Cole cannot give them answers. Even though he survived, he cannot remember what happened that day. On top of his amnesia, Cole is dealing with the recent death of his father and his mother’s depression.

Every Moment After is a gripping story that focuses on the survivors of a mass shooting. The story alternates between Matt’s and Cole’s points of view, which allows readers to feel the emotions of both victims. Written by a clinical psychologist, Every Moment After accurately explores topics of survivor’s guilt, grief, and changing relationships. As the two friends struggle to cope, they learn that “you don’t have to do it all at once. You just have to get through one breath at a time. One moment at a time.” However, both Matt and Cole sometimes find it difficult to move on, even one breath at a time.

In a time where mass shootings frequent the nightly news, Every Moment After explores a topic that many teens may have questions about. Matt and Cole are relatable characters struggling with questions about the past as well as their futures. As the boys take their first steps towards adulthood, their long-term friendship with each other is a crucial component in their journey. The boys’ friendship highlights the importance of having at least one person who has and will always love you, just as you are.

Every Moment After will leave readers thinking about gun control and the effects of mass shootings. It will take readers on an emotional, tearful journey, providing new insight and empathy for anyone who has suffered a great loss. In the end, the story makes it clear that “there are some things you can’t leave behind. They cling to you like cobwebs. They leave you with empty spaces. And the only thing you can do is to keep on going, as well and as gracefully as you can, without your missing parts.”

“My mom said it wasn’t my time. Like, I was meant to live so that I could do something good. That’s why I’m gonna be a teacher, to do something good in the world,” Luther. –Every Moment After