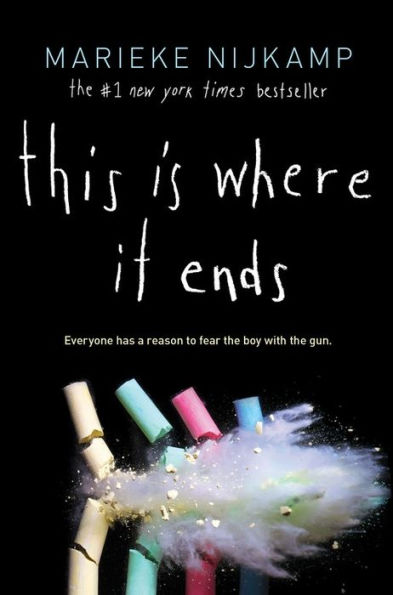 This is Where It Ends

No one ever thought this could actually happen to them. Not here. Not in Opportunity, Alabama.

It is just a normal morning at Opportunity High School when a frightening series of events forever alters the lives of all who are inside. At the conclusion of Principal Trenton’s back-to-term speech in the auditorium, the exit doors fail to open as thousands of students frantically attempt to exit. Two minutes later, someone starts shooting.

Lasting only fifty-four minutes, this harrowing story is told from the perspectives of four different students, each of who have personal connections with the shooter. Those minutes are packed with enough action and tension to feel like a year. This suspense-filled novel dives deep into the emotions of high schoolers and examines the complexities of a murderer’s personality. Riddled with guilt and fear, the characters of this novel make the tragic and once so seemingly impossible situation relatable for the average teen reader.

As the subject matter of this book is very mature, it is not recommended for younger readers. It deals with content such as a school shooting, the passing of a parent, violent deaths, and homosexuality. The author suggests it for readers 14 and above, but some teens may still be disturbed by the novel’s contents. Nevertheless, This is Where it Ends is a well-written and compelling book that examines a topic that has become increasingly important in modern teens’ lives. It allows readers to ponder the intricacy of teen relationships and the value that we place on social acceptance.