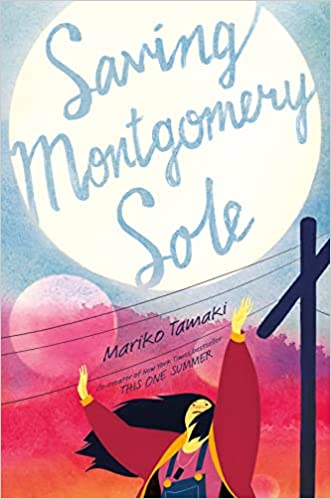 Other books by Mariko Tamaki

Montgomery Sole is used to being the odd one out, the “mystery” kid, at school and in her small town. Montgomery is used to being judged and misunderstood by those around her, mainly because she has two moms. But Montgomery finds solace in her friends, Thomas and Naoki, who, like her, enjoy a good mystery. Together the group forms a school club dedicated to all things mysterious, strange, and unexplained.

One day, after falling down a deep rabbit hole on the internet, Montgomery finds the “Eye of Know,” a possibly all-powerful and all-seeing crystal amulet, that is only $5.99. Intrigued by the mystery and ambiguity surrounding this necklace, Montgomery buys it. But once she begins to wear the Eye of Know, strange things begin to happen. People Montgomery despises, like her school bully, have unexplained terrible things happen to them.

Montgomery, not knowing what is happening, begins to confront the bullies and ignorance in her life, fueled by her anger toward them. Montgomery is forced to learn how to deal with these mean people, without losing herself and the people she loves most in the process. Montgomery is a caring, headstrong, passionate sixteen-year-old. As she is dealing with the bullies and ignorance in her life, she is also trying to grow up and explore her interests. While Montgomery becomes slightly obsessed with figuring out all the mysteries of the world, she is reminded that when “exploring… [in] the end of it, what you know is you.” Montgomery reminds readers that you don’t need to try to fit in with society’s standards and that it is okay to simply be a mystery.

Saving Montgomery Sole discusses religion and its weaponization. Growing up, Montgomery has felt at odds with religion since it has often been forced upon her. Plus, it is the religious people in her life who have told her that she and her family need to change. For example, when Montgomery was younger, her religious, Evangelical grandparents often told her that she needed a real father and she needed to be a “good Christian” girl. Then, when a religious preacher moves into town and begins plastering posters around the community that say the American family needs to be “saved,” Montgomery again feels targeted. Montgomery feels as if her family and their way of life are being attacked by this preacher, who is claiming to know what is right and wrong, and his religion. In the end, Montgomery realizes that while there will always be some people who use religion negatively to force their beliefs on others, it does not mean she needs to feel attacked. Montgomery realizes she can rise above the hate.

Saving Montgomery Sole also highlights the importance of friendship and family. Throughout the novel, Montgomery keeps her worries and fears to herself. While Montgomery is feeling attacked by the new preacher and the school bullies, she keeps this to herself, insisting to those around her that she is fine. This only increases Montgomery’s feelings of isolation. It is only when she talks to her moms and her friends about what is bothering her that she begins to feel better. Montgomery reminds readers that they are not alone, and of the importance of relying on one’s support system in times of need.

Overall Saving Montgomery Sole is a great book, with a diverse and hilarious cast of characters. Its magical undertones and fun storyline balance out its serious messages about hate and bigotry. While Montgomery Sole is coming to terms with the difficult world around her, she reminds the audience that it is okay to be unique. Montgomery’s actions show that people do not need to fit into society’s mold.

Other books by Mariko Tamaki