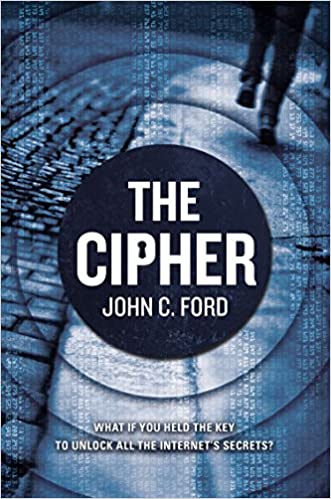 “Sometimes it’s best not to turn over every rock in a person’s life. Especially if they’ve treated you well. If they have fed you and clothed you and provided you a comfortable life that you enjoy, one you would not wish to see compromised,” Professor Worth. –The Cipher

Robert “Smiles” Smylie is not a genius. He feels like he’s surrounded by them, though, from his software mogul dad to his brainy girlfriend to his oddball neighbor Ben, a math prodigy. When Ben cracks an ancient riddle central to modern data encryption systems, Ben suddenly holds the power to unlock every electronic secret in the world—and Smiles finally has a chance to prove his own worth.

Smiles hatches a plan to protect Ben from the government agents who will stop at nothing to get their hands on his discovery. But as Smiles races from a Connecticut casino to the streets of Boston, enlisting the help of an alluring girl, he comes to realize the most explosive secrets don’t lie between the covers of Ben’s notebook—they’re buried in his own past.

With topics such as public-key cryptography, the Riemann Hypothesis, and prime numbers, readers may be reluctant to pick up The Cipher. However, the mystery and thriller aspects of the story will quickly draw readers into the story and keep them entertained until the last page. The story explains many mathematical principles in a way that makes the math accessible to all readers. Even though the story focuses on math concepts, Smiles’ family life, his love life, and the mystery behind his birth mother combine to make a truly entertaining read.

Even though Smiles doesn’t have to worry about money, his life is a mess. His adoptive mother died in a tragic car accident. He feels like he is a disappointment to his father. His birth mother rejected his attempt to reach out to her. Plus, he was kicked out of his prestigious high school for having weed in his dorm room. To make matters worse, his longtime girlfriend, Melanie, broke up with him. Smiles is a complete and total mess, and many teens will relate to Smiles’ wide range of emotions and the feeling that he isn’t sure what he should do with his life. Despite Smiles’ messy life, readers will find themselves rooting for him.

Ford writes his story in the third person point of view, which allows readers to see the same events from different people’s perspectives. This adds a layer of depth and intrigue. In the end, each character reveals a different piece of the mystery. The thought-provoking conclusion will leave readers questioning morality, forgiveness, and the nature of love. Readers looking for a fast-paced mystery full of surprises will find all that and more in The Cipher.

“Sometimes it’s best not to turn over every rock in a person’s life. Especially if they’ve treated you well. If they have fed you and clothed you and provided you a comfortable life that you enjoy, one you would not wish to see compromised,” Professor Worth. –The Cipher