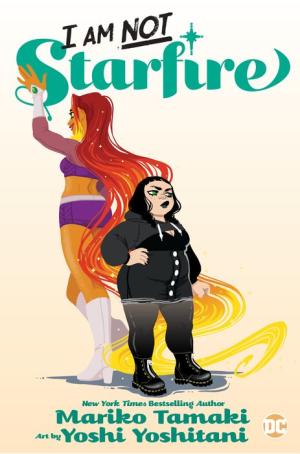 “I used to say ‘Just because you know my mom, doesn’t mean you know me.’ But that’s not kind of true. I am...the Anti-Starfire,” Mandy Anders. ― I Am Not Starfire

I Am Not Starfire

Mandy Anders is the daughter of Koriand’r/Kory Anders, otherwise known as the superheroine Starfire from Teen Titans. For most of her life, Mandy has lived in the shadow of her mother’s fame as a superheroine, and Mandy’s lack of superpowers only enhances her stress. Kids at school constantly pester her for information on her mom. They look for Mandy’s superpowers. They even theorize about her online. Combine that with high school and it’s easy to say Mandy’s life is a bit of a disaster.

Mandy’s only real friend is a boy named Lincoln, she has a crush on popular girl Claire, and she walked out on her S.A.T which her mother is completely unaware of. After walking out on the test, Mandy has become more distant with her mom. What appears to be a normal, yet rocky mother-daughter relationship devolves into a massive fight over Mandy’s future and her life.

I Am Not Starfire is told from the perspective of Mandy and follows her life at a normal high school in Metropolis until it is upended by the arrival of Blackfire, Starfire’s sister. Readers get to follow Mandy’s emotions as the story progresses, as well as experience her relationship with her mother from her point of view. Mandy’s story centers on learning to not take her mother for granted, understanding the importance of her connection with her mother regardless of her being Starfire the superhero, and taking risks in all manners of life.

Some readers may relate to Mandy’s struggles with school, college, being unsure of what she wants to do in the future, as well as her rocky relationship with her mother. Queer readers will especially relate to Mandy as she has a crush on a female peer, Claire, and her attraction and eventual relationship to Claire is presented as normal– not something that requires a grand “coming out of the closet” moment. However, some may find Mandy’s dialogue and thought process too edgy and sometimes misogynistic. For example, Mandy makes a comment about her mother’s outfits: “She wears less than a yard of fabric to work every day, yet somehow, I’m the one who’s dressing weird.”

I Am Not Starfire has beautiful art that readers will find attractive. The character’s faces are expressive, and the color composition of certain scenes highlights the emotions Mandy feels in that particular moment. Readers may also appreciate the outfits in I Am Not Starfire. Starfire and Blackfire’s outfits are modern, the kind that the targeted audience would recognize, but they are presented in a way that will make them timeless.

I Am Not Starfire is a quick read with simple vocabulary and pretty pictures. Each page has about fifty or fewer words, all of them either in speech bubbles for dialogue, boxes for the characters’ thoughts, or rounded rectangles for text messages. However, I Am Not Starfire doesn’t have a good plot or good character development. While the graphic novel provides a good entrance to the DC universe, it falls flat on its message: the people around you don’t define who you are, and you can be whoever you want to be.

Anyone who is looking to get into its massive and ever-expanding universe will find I Am Not Starfire entertaining. New fans will be incentivized to investigate DC as a whole and learn more about Starfire and the Teen Titans. However, readers who are already fans of DC comics will find this graphic novel very disappointing as it has inaccurate information on Starfire’s powers, goes against DC’s established lore, and overall is written poorly. If you’re looking for a fun, well-written graphic novel with a positive message and an LGBTQ character, Pumpkin Heads by Rainbow Rowell & Faith Erin Hicks would be a good choice.

“I used to say ‘Just because you know my mom, doesn’t mean you know me.’ But that’s not kind of true. I am...the Anti-Starfire,” Mandy Anders. ― I Am Not Starfire