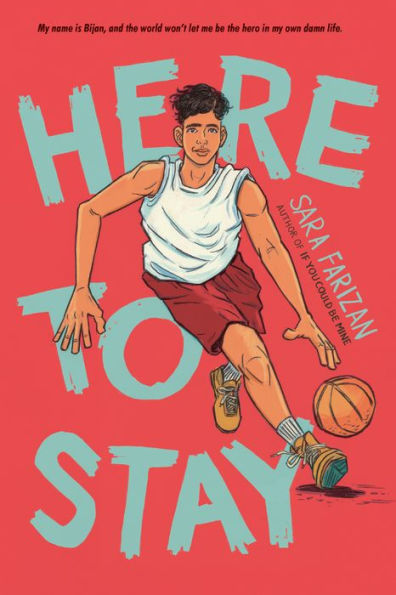 “Unlike our dumb mascot, I am here to stay. I’m not going anywhere,” Bijan Majidi.  —Here to Stay

Bijan Majidi loves basketball, comic books, and his mom. When he makes it on the varsity basketball squad, he’s over the moon. Now he’s getting noticed and being invited to parties with the cool kids. But when someone sends the whole school a photoshopped picture that makes Bijan look like a terrorist, he has to deal with the fallout. Here to Stay examines the prejudices and identities that envelop the lives of Bijan and his classmates.

Here to Stay tackles discussions about race and prejudice against the backdrop of a wealthy, white, New England neighborhood. Sara Farizan’s commentary creates a rich dialogue that acutely questions a status quo that harms students who aren’t white. Bijan, who is half Persian and half Jordanian, experiences microaggressions and a hate crime. Bijan is also put under emotional and social strain. Despite this, Bijan is resilient and handles the situations thrown at him through his wit and the strength of his heart.

Along with the discussion of race, Farizan includes two LGBTQ+ characters who initially hide their relationship because they fear their community’s backlash. In both overarching plot points, acceptance and sticking up for oneself are recurrent themes. Although not everyone in the novel is kind to these characters or to Bijan, the supporting cast of friends are loyal and kind people.

Bijan is undeniably a good main character. He’s friendly, funny, and sticks up for himself and his friends. Occasionally, some characters’ dialogue comes across as strange or too young for teenagers. However, it doesn’t make the characters any less likable. Considering all the dark topics that Here to Stay covers, Bijan’s inner monologue is really funny and brings some much-needed lightness to an otherwise depressing situation.

Farizan does an excellent job presenting a discussion around prejudices and integrating it with a fun high school basketball story. Ultimately, life is made up of great, game-winning moments as well as terrible moments. Bijan’s story is about dealing with other people’s prejudices, but he’s also a teenager who has crushes and who likes basketball. These things are not separate from each other, and Farizan presents Bijan as a whole person who deals with a full range of human experiences. Here to Stay is powerful, not necessarily because Bijan is extraordinary, but because his story is a reality for many people. Readers certainly won’t have a difficult time finding something to like about Bijan and his story.

“Unlike our dumb mascot, I am here to stay. I’m not going anywhere,” Bijan Majidi.  —Here to Stay