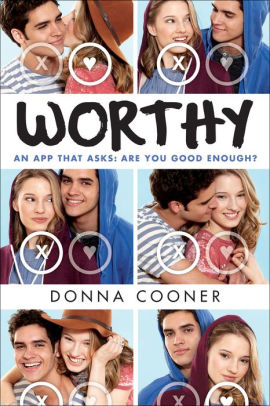 “The internet creates beasts who don’t have the nerve to say anything to your face, but speak their poison in typed messages behind computer screens. There’s no beauty hiding there, and the ugliness is so much more than skin deep,” Linden. –Worthy

Everyone at Linden’s high school is obsessed with a new app called Worthy. The app posts pictures of couples and asks, “Is the girl worthy of the guy?” Some use the anonymous platform to post cruel comments. As the voting goes viral, not every couple can handle the comments that begin to collect. The comments aren’t only online: the app and the couples it features are the topic of every conversation at school.

At first, Linden is focused on other things like cute Alex Rivera, the Prom Committee, and her writing. But soon, Linden is just as obsessed with Worthy as everyone else. Soon, the app is causing problems between Linden and her best friend, Nikki. What will happen when the spotlight turns on Linden?

Readers will relate to Linden as she struggles with online bullying. Even though Linden knows that posting mean comments online is wrong, she doesn’t have a problem voting. As the story progresses, four different couples are featured on Worthy. Linden overhears many conversations about the couples that allow the reader to understand how superficial the voters are. As more and more teens get caught up in the voting craze, Linden is forced to evaluate her own motives for voting. When Linden and Alex are featured on the app, Linden finally realizes how devastating people’s comments can be.

In a world where so many teens are connected on social media, the story has a realistic conflict; however, there are so many minor characters that it is often difficult to keep track of them all. Because the minor characters seldom appear, readers may find it difficult to care about how the app affects them. It isn’t until the app focuses on Linden that the conflict becomes more suspenseful. The story is told from Linden’s point of view, which allows the reader to understand her insecurities and her fears as well as see her personal growth.

Worthy is a cute romance that has several positive aspects. Nikki, Alex, and Linden’s parents all make a short appearance in the story. Despite that each family is different, they are all portrayed in a positive light. The story shies away from profanity and sex. Even though the story drags at points, the positive messages in the book make it worth the read. Connor makes it clear that teens need to look past people’s appearances. The story also shows the damage that online bullying can cause in relationships. Worthy isn’t afraid to explore difficult topics and would be an excellent book to use as a conversation starter.

“The internet creates beasts who don’t have the nerve to say anything to your face, but speak their poison in typed messages behind computer screens. There’s no beauty hiding there, and the ugliness is so much more than skin deep,” Linden. –Worthy