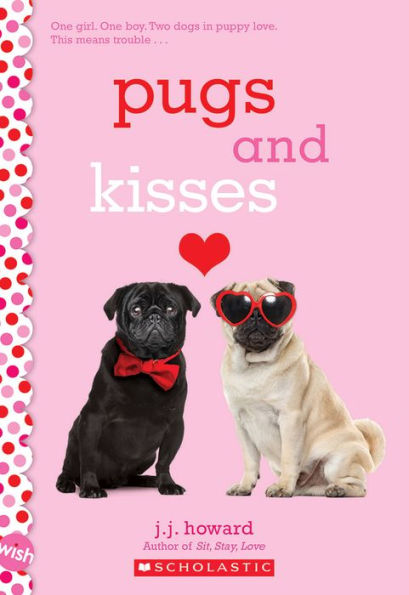 “Why am I so terrible at lying? And worse than that, why am I even lying in the first place?” Ana. –Pugs and Kisses

Ana Ramos has always wanted a dog of her own, but her mother has a no pet rule. That’s one of the reasons Ana is happy to walk her neighbor’s adorable pug, Osito. When Ana takes Osito to the park, Osito befriends another pug, whose owner is a cute boy named Calvin. When Calvin assumes that Osito belongs to Ana, she doesn’t correct him. After all, Ana probably won’t see Calvin again.

Then Calvin enrolls in Ana’s school and they have several classes together. When Calvin suggests setting up playdates for the two pugs, Ana pretends that Osito is her dog. Soon, Ana discovers that she’s telling lies to cover up the fact that she lied about Osito. As time goes by, Ana’s lies increase, and she’s using both her best friend and her sister to help keep her secret. Ana wants to fess up about her lies, but she’s afraid of Calvin’s reaction. How is Ana ever going to get out of this mess?

Ana and Calvin meet at the dog park and bond over their love of pugs. Even though Pugs and Kisses uses the traditional romantic movie formula, younger readers will enjoy the sweet story of Ana’s first crush. Middle graders will understand Ana’s confusion when it comes to her feelings for Calvin. When Calvin invites her over to his house for dinner, Ana isn’t sure if going to his house is a “date” or just two friends hanging out. One positive aspect of Ana’s crush on Calvin is that both Ana and Calvin are smart and do not try to hide their love of academics.

The story hits on topics that are important to middle graders: friendship, families, and crushes. Ana is an imperfect character that readers will be able to relate to. Ana is often frustrated with her family, worries about school, and wonders about her emerging feelings for Calvin. However, the story doesn’t just focus on Ana’s family and Calvin. Another positive aspect of Pugs and Kisses is that Ana’s Puerto Rican heritage is naturally integrated into the story. Readers will learn facts about Ana’s sister’s quinceañera and her neighborhood.

Despite the predictable plot, the pugs and cute awkward moments will appeal to younger readers. Pugs and Kisses will entertain readers who aren’t ready to read longer books such as The Selection series by Kiera Cass. Readers who want a light romance with more action should read the Gallagher Girls series by Ally Carter.

“Why am I so terrible at lying? And worse than that, why am I even lying in the first place?” Ana. –Pugs and Kisses