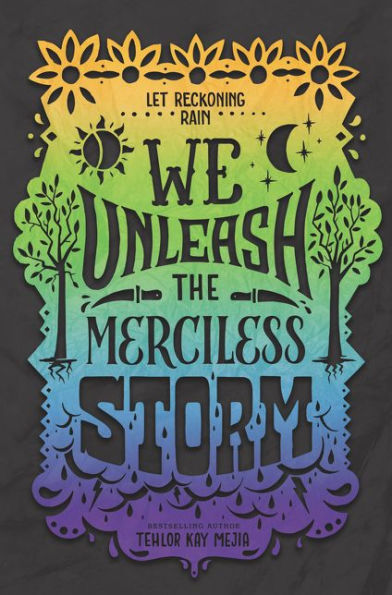 “This was no longer her home. Her home was a million miles away, beating in the body of a girl she might never see again,” Carmen. –We Unleash the Merciless Storm

We Unleash the Merciless Storm

We Unleash the Merciless Storm is the second book to take place in Medio, a world ruled by a wealthy inner city and divided by walls. In Medio, wealthy men take two wives—a Primera and a Segunda—who have trained their entire lives to fill these positions. Meanwhile, rebellion brews in the outer lands, and the rebel faction, La Voz, plans to strike on the capital. In We Set the Dark on Fire, Dani Vargas becomes a Primera to the powerful and dangerous Mateo. Dani becomes involved in a world of espionage and subterfuge while falling in love with Mateo’s Segunda, Carmen. We Unleash the Merciless Storm picks up right where We Set the Dark on Fire left off, following the aftermath of the car explosion that ended the first book.

Half of the story is told from Carmen’s perspective. When she returns to the headquarters of La Voz, Carmen discovers that the organization’s leadership is on thin ice, with distrust and skepticism everywhere. After having her loyalties questioned in light of her relationship with Dani, Carmen leaves the La Voz camp and steals back into Medio’s central city to find Dani. After a perilous journey, Carmen and Dani are reunited and must go on the run to escape the government’s police. What follows is a climactic battle as Dani and Carmen fight to stay together while turbulent change spreads across Medio.

Readers who enjoyed We Set the Dark on Fire will enjoy this second installment, which concludes the story of Dani and Carmen’s relationship. Their passionate love is the heart of this story, and readers will be rooting for this couple as they overcome adversity.

The political undertones of this book are similar to those of the first installment, as the characters rail against oppression and a corrupt government. A wall divides Medio, and the rebels must sneak past border patrol agents and hide from the police.

Readers will enjoy seeing Carmen’s past explored in more detail. Carmen, who has been raised by La Voz and taught to put the cause first, often feels conflicted about her loyalty to Dani, which is just as strong as the loyalty she feels to the rebellion. She also feels conflicted about the number of violent acts she has committed as a La Voz agent and wonders what Dani will think of her. The moral conflict over violence forms a large part of the story. La Voz’s leader says, “The goal of true resistance is not violence. It’s not about blood or death. The goal of true resistance is peace. Abundance. Violence is only a means to an end.” Throughout the story, La Voz agents strive to stay true to their morals and find that it is often difficult.

We Unleash the Merciless Storm is not quite as intriguing as the first book and includes less of the captivating world-building and detail that marked its predecessor. Still, the plot moves quickly and readers will be eager to keep turning the pages to find out what happens next. Part apocalyptic love story and part espionage spy thriller, this sequel will satisfy fans of the first book.

“This was no longer her home. Her home was a million miles away, beating in the body of a girl she might never see again,” Carmen. –We Unleash the Merciless Storm