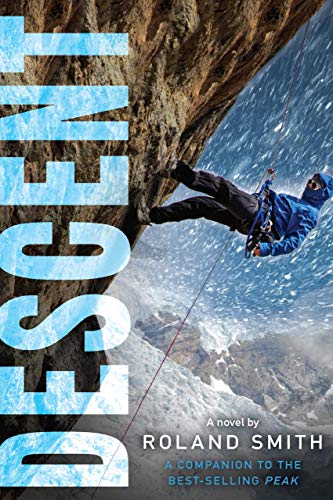 “Going out and doing good things has nothing to do with convenience, likes, or dislikes. It was about doing the right thing regardless of what it might cost you,” Peak Marcello. —Descent

Peak, Zopa, and Joshua Wood’s adventure down the mountain, Hkakabo Razi, continues as the group is pursued by the Chinese government. Picking up immediately where the last book left off, Peak and the gang are running out of time to escape both the mountain and China. Fortunately, Zopa has more tricks up his sleeve as they search for sanctuary in the fabled monastery, Pemako. But with old enemies on their heels, the group will have to move quickly to avoid capture.

As the final installment to Peak’s adventures, Descent is an action-packed ending that wraps up all the loose ends. Although the first half of Descent is slow, the rest of the story is fast-paced with plenty of new elements, including the hidden monastery, Pemako. Peak learns much more about Buddhist beliefs and life in Pemako, thanks in part to Zopa’s increased role.

Despite being on the run from the Chinese government, the main theme that Peak and the other characters drive home is the importance of going out into the world and doing good, even when it may be difficult. An old enemy from the first installment named Captain Shek reappears. While climbing, Peak decides to save Captain Shek because Peak feels that letting the captain fall to his death would be wrong. This decision arises despite Captain Shek’s merciless pursuit of Peak, Zopa, and Joshua Wood, and despite Captain Shek’s aims to capture and imprison Peak and his family. At one point, Captain Shek does capture Joshua and beats him. Regardless, Peak shows Captain Shek humanity and mercy by saving his life, even if Captain Shek has no interest in showing Peak or the others any compassion.

Descent is as much about survival as it is about climbing, though climbing is once again a big part of the book. Although Peak’s climbing adventures do end with this book, Peak takes away important lessons about finding inner peace and being a compassionate person. Throughout the series, Peak has shown time and time again that he is a strong-willed teenager, but he really shines when he consciously decides to be the best person he can be. His talent as a climber is impressive, but even that comes second to his ability to choose humanity over revenge. Descent is a strong conclusion to Peak’s story. Although readers will be sad to see the series end, the lessons learned will outlast even the books themselves.

“Going out and doing good things has nothing to do with convenience, likes, or dislikes. It was about doing the right thing regardless of what it might cost you,” Peak Marcello. —Descent