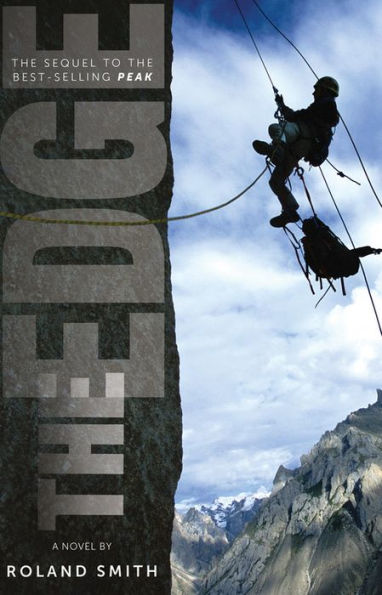 “Everything that happens has purpose, which is another thing you can think about when you are not fleeing for your life,” Zopa. —The Edge

For an upcoming documentary, billionaire Sebastian Plank recruits a team of young climbers to complete an International Peace Ascent on mountains all around the world. To fulfill part of Plank’s documentary, fifteen-year-old Peak Marcello and his mom are flown to the Hindu Kush mountains in Afghanistan along with a few other young climbers and a documentary crew. But when the camp is attacked and hostages are taken, Peak has to track down the attackers to save his friends and mother.

The Edge is the second book in the Peak Marcello Adventure Series and takes place relatively soon after his adventures in the first book, Peak. Much of the same cast from the first book is back, including the mysterious Sherpa guide/monk Zopa, Peak’s mom, and the documentary crew. Peak himself is still a fun and interesting character, and his love for his family and humanity, in general, makes him a sympathetic protagonist.

Much like in the first book, survival and climbing are strongly intertwined themes. Peak spends much of the book using survival techniques and climbing to find and save his mom and fellow climbers. He, fortunately, has the help of Ethan, a new character who is a fellow climber and former marine. Peak looks up to Ethan, and Ethan serves as a practical guide who keeps Peak and the others from dying out in the elements.

This second book’s plot involves political intrigue and terrorists, so it has more graphic violence than the first book. One of the climbers, Alessia, is the daughter of a French diplomat that Peak befriends and shows romantic interest in. Over half of the climbing group is taken as hostages from camp, and several of the group are killed on camera. The attackers make it clear that they are using the hostages to get money from the French government because they have the daughter of one of their diplomats, and they themselves are former French soldiers. Although Peak is spared from seeing some of the worst parts, some of the more gruesome scenes are described by other characters. The Edge covers sensitive topics like murder and a hostage situation, so younger readers should be prepared for more nitty-gritty details than in the first book.

The Edge furthers Peak’s story while rounding out old characters and introducing new ones. Peak and the others use their climbing skills to survive as well as perform for the camera. Despite the overall serious tone of the book, there are lighthearted moments early on from the documentary guy, Phillip, who clearly doesn’t understand much about climbing and causes some humorous frustration for Peak. This series is for people who like climbing and those who really want an action-packed adventure. Fans of Peak won’t have to look far for his next climbing journey, which is detailed in the next book in the series, Ascent. Although The Edge is a complete story on its own, the next book will surely have a new mountain for Peak to scale.

“Everything that happens has purpose, which is another thing you can think about when you are not fleeing for your life,” Zopa. —The Edge