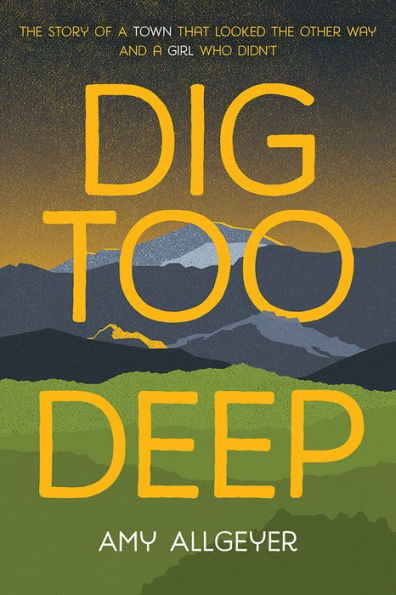 “And that’s when I see it. Or rather, don’t see it. Tanner’s Peak. The whole top of the freaking mountain … it’s just gone.” – Liberty Briscoe

Liberty is an independent teenager. She cooks, cleans, maintains a perfect GPA, plays volleyball, and applies for scholarships all by herself. However, her seemingly perfect life is turned upside down after her political activist mother is arrested on suspicion of being involved in a Washington DC car bombing. Her perfect life and her hopes of attending Georgetown are trashed. When her mother is sent to prison, Liberty is sent to Ebbottsville, a small town in rural Appalachia, to live with her grandmother. Liberty lived in Ebbottsville when she was a child, but now the top of Tanner’s peak is gone and the town’s water is neon orange.

Out of her comfort zone and away from her best friend, Liberty has to live in poverty and help her ailing grandmother suffering from lung cancer. At school, she is mocked as the “new girl” and she has a hard time adjusting to rural life when everyone seems to instantly hate her. However, Liberty quickly learns that her grandmother’s condition may have been caused by the infamous Peabody mining company’s mountaintop mine. Liberty soon finds herself in a fight with an infamous mining tycoon who will stop at nothing to keep his grip on the community. Will Liberty beat Peabody or will he silence her forever?

Poor, run-down, and alone – Allgeyer paints the perfect picture of a troubled girl against an unstoppable corporation in Dig Too Deep. Liberty is a good example for young girls, encouraging them to have a strong moral center and to take a stand when they feel something is wrong or unfair no matter the risk. Liberty takes time away from her own personal goals to care of her sick grandmother, which highlights the importance of loving with all of your heart. Liberty also shows forgiveness when she accepts her mother back into her life.

Dig Too Deep raises questions about modern-day mining practices and shows some harsh consequences of corrupt mining. The book brings environmental issues to young readers, encourages them to think about others, and research other environmental problems affecting our world.

Dig Too Deep has a quick and suspenseful plot with a perfect mix of teenage angst and real-world problems. Readers will not be able to put the book down because of the nonstop suspense. Liberty is a relatable character that readers will root for as she fights a corrupt mining organization. However, Allgeyer does push the extremes of young adult fiction and due to its intense sexual content, violence, and language, this book is best for older readers. Nonetheless, Dig Too Deep is a great book for those looking for a strong female character or for a book that discusses modern-day environmental issues.

“And that’s when I see it. Or rather, don’t see it. Tanner’s Peak. The whole top of the freaking mountain … it’s just gone.” – Liberty Briscoe