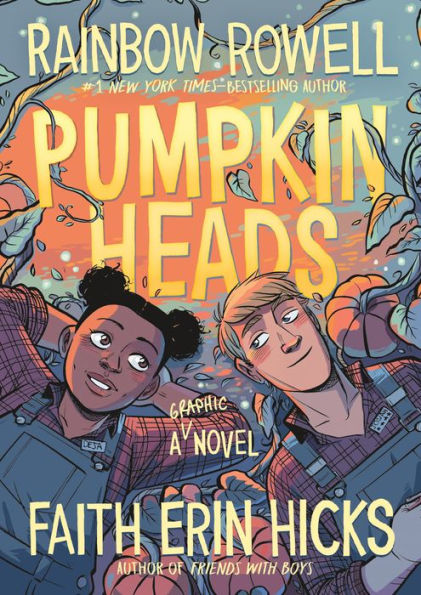 But this Halloween is different—Josiah and Deja are finally seniors, and this is their last season at the pumpkin patch. Their last shift together. Their last good-bye.

Josiah’s ready to spend the whole night feeling melancholy about it. Deja isn’t ready to let him. She’s got a plan: What if—instead of moping and the usual slinging lima beans down at the Succotash Hut—they went out with a bang? They could see all the sights! Taste all the snacks! And Josiah could finally talk to that cute girl he’s been mooning over for three years…

What if their last shift was an adventure?

For three years, Josiah has had a crush on Marcy, a girl he only sees when they work at the pumpkin patch. On the last night of work, Deja talks Josiah into skipping their shift so Josiah can find Marcy and finally talk to her. Reluctantly, Josiah goes along with Deja’s plan. Readers will fall in love with the two characters as they explore the pumpkin patch looking for Marcy. Josiah is shy, sweet, and afraid of rejection, while Deja is confident, outgoing, and completely determined to have Josiah meet the girl of his dreams.

Pumpkin Heads brings all the joys of fall to life—the food, the corn maze, the pumpkins, and the friends. Throughout it all, Deja and Josiah discuss the idea of fate versus free will. The two friends reminisce about their years working at the pumpkin patch and worry about what the future will bring. As the two race against time trying to find Marcy, the story includes some wonderful patches of humor. For example, when Josiah worries about leaving the succotash booth, Deja says, “For God’s sake, Josie—true love trumps lima beans!”

Pumpkin Heads will encourage readers to be bold and live without regrets. Although the plot is a bit predictable, the main characters are truly unique. In the end, Josiah realizes that people cannot be judged by their looks. The only way to truly know someone is to talk to them. The graphic novel is illustrated in the orange and brown hues of fall, and each page has 1-8 sentences of text. The story is a quick read that will leave readers with a smile.