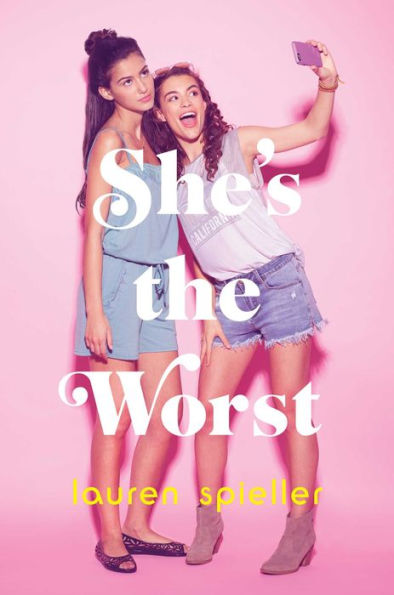 “I might think my sister is a little boring, but that’s nothing compared to the way my sister feels about me,” April. —She’s the Worst

Sisters Jenn and April used to be close, but lately they’ve been drifting apart. Thanks to school, sports, and the looming threat of college, the two don’t spend much time together. Plus, their emotionally immature, always-bickering parents have made their home an unpleasant place. But as Jenn prepares to start college, April remembers a pact she made with Jenn at the beginning of high school: before Jenn leaves town, they’ll spend the whole day together, revisiting places in Los Angeles that hold special memories for them.

Despite boyfriend troubles, needy parents, and secrets keeping them apart, the girls manage to make time to embark on their journey. Through the course of the day, secrets are revealed, arguments break out, and tensions rise. High-achieving Jenn plans to leave for Stanford soon, but she hasn’t told her parents, who think that she is staying in LA to work at the family antique store. Messy, sporty April thinks she can get a soccer scholarship, but doesn’t know how to get her family to take her hobby seriously.

While the girls work through their issues with themselves, their parents, and their respective love interests, they discover that they haven’t been communicating nearly enough. By respecting each other’s differences and talking things through, they’re able to address conflicts that have been bothering their family for years—and become closer as sisters. Through the course of a single day, their lives and relationships change dramatically.

She’s the Worst is a light read that moves quickly through its time frame of a single day. Its fast pacing sometimes comes at the expense of emotional impact or effective description. Readers still may find themselves connecting emotionally to Jenn and April’s struggles, especially when the story addresses their parents’ relationship.

The family antique store has caused a rift in April and Jenn’s parents’ marriage, and the sisters have both coped in different ways—Jenn mediates her parents’ arguments, while April spends as little time around them as possible. Readers who are familiar with such family dynamics will enjoy seeing them faithfully played out on the page. After seeing how desperately Jenn wants to get away from her parents, but how deeply they rely on her to keep the family business functioning, readers will surely root for her in her quest to leave her hometown.

She’s the Worst promises a story of sisterhood, and while it delivers that story, it also delivers a story of dysfunctional families, emotionally immature parents, and the complicated relationships people have with their hometowns.

“I might think my sister is a little boring, but that’s nothing compared to the way my sister feels about me,” April. —She’s the Worst