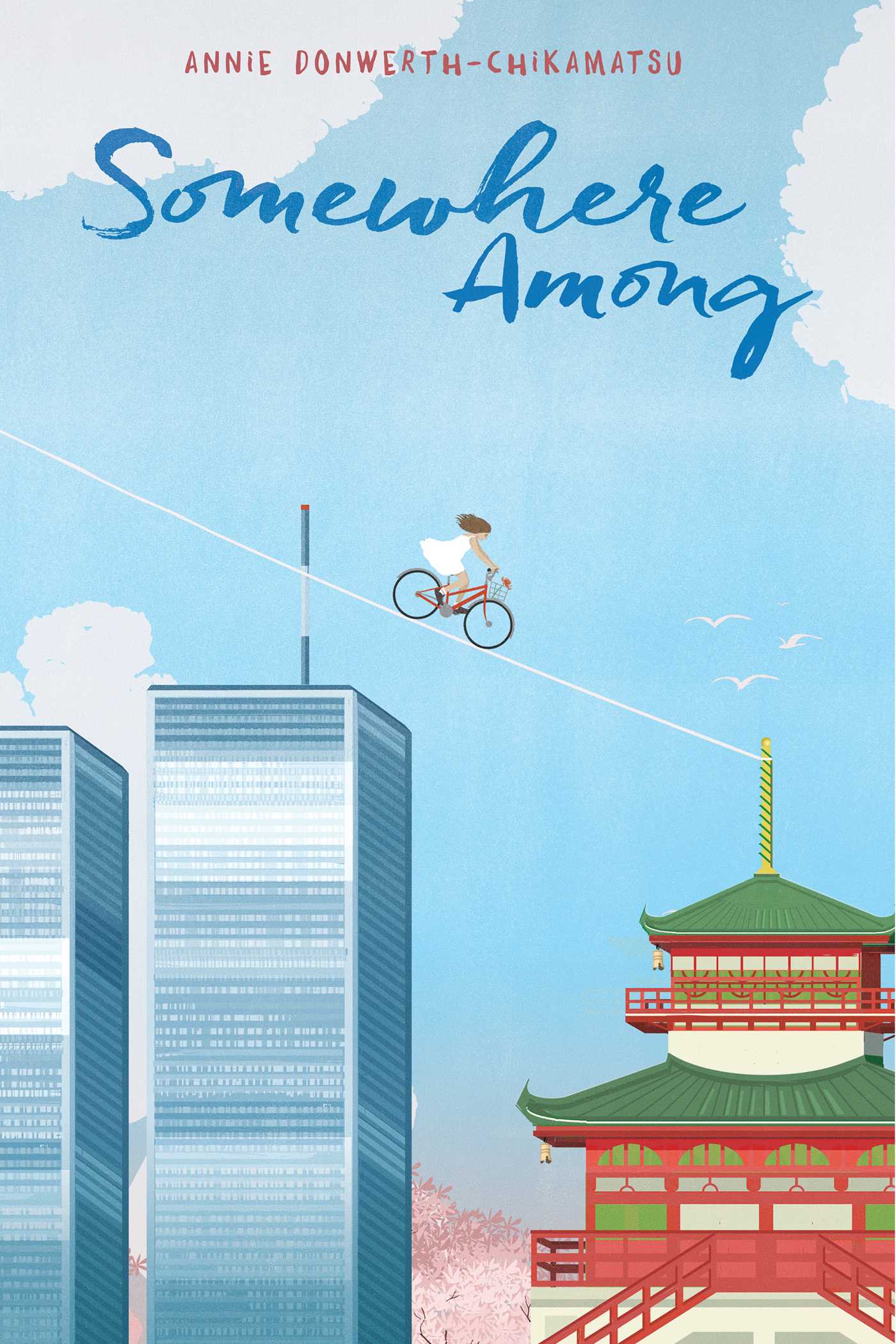 “I tell her I am trying to put peace in my heart. I tell her I think Obaachan is trying too,” Ema. —Somewhere Among

Ema is used to spending her summers in California with Bob and Nana, her mother’s parents. But this year, she and her mother are staying with her father’s parents in Japan, as they expect the arrival of a baby. Her mother’s pregnancy has been shaky, making everyone anxious for her health. Despite her mother’s physical wellbeing, Ema is happy because, finally, there will be someone in her immediate family who understands what it is like to fit in and not fit in at the same time.

Ema’s happiness is dashed when Obaachan, her Japanese grandmother, scolds her for the smallest mistakes. When she and her mother must stay in Japan longer than anticipated, and Ema has to attend a new school, her concerns about not fitting in become bigger. And when the tragedy of 9/11 strikes the United States, Ema and her parents watch the Twin Towers fall and the aftermath of the attack.

Her mother grieves for the United States, her home country. Ema also worries about her mother’s health, which threatens the safety of the baby. Alongside the grief, Jiichan gets ill, which worries Ema. Ema feels lonely, but then Obaachan shows a kinder side of herself and reveals the reason for her sternness—she had done so to prepare for her family for the worst.

As a whole, the story occurs from June 2001 to December 2001. Each month has an illustration relevant to a seasonal theme. Each chapter is told from Ema’s perspective, which helps the reader understand her solitude and the Japanese culture from her point of view. The story is written in free verse and portrays a detailed and orderly environment, with the descriptions grounding the reader in Ema’s headspace and forestalling confusion about Japanese folklore, language, and cultural norms. Though Ema is lonely, she is a happy and optimistic child, always taking part in traditional holidays or outings with her parents.

Since Ema lives with a lot of adults, the story details a lot of current events and the repercussions of historical events. Somewhere Among portrays the Japanese perspective on domestic tragedies, such as the bombing of Hiroshima and Nagasaki, and the observance of abroad tragedies, such as the attack on Pearl Harbor. However, the incidents are a backdrop in Ema’s life and the weight of the tragedy is with the adults in the room. Through these incidences, the story reinforces the importance of having “peace among nations/ peace among peoples/ peace in the heart.”

The story also hits on Ema’s identity as a “hafu,” or a person who is half-Japanese. Middle grade readers will relate to Ema, who is struggling to exist in a foreign country. For example, Ema’s classmates scrutinize her because of her mixed heritage. They make fun of her facial features and her name, and ignore it when Masa, a boy in her class, bullies her. In the end, Ema stands up for herself and feels like she has a place in Japan. The story ends on a light note and shows Ema’s family after the end of their struggles. Readers who would like to read more about historical events in Japan would enjoy reading Somewhere Among.

“I tell her I am trying to put peace in my heart. I tell her I think Obaachan is trying too,” Ema. —Somewhere Among