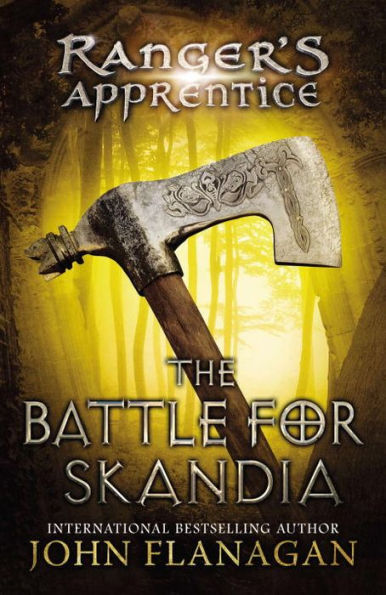 “A good leader is someone who knows what he’s bad at, and hires someone who’s good at it to take care of it for him,” Halt. –The Battle for Scandia

The Battle for Skandia

Still far from home after escaping slavery in the icebound land of Skandia, young Will and Evanlyn’s plans to return to Araluen are spoiled when Evanlyn is taken captive. Though still weak, Will employs his Ranger training to locate his friend, he but soon finds himself fatally outnumbered. Will is certain that death is close at hand, that is until Halt and Horace make a daring, last-minute rescue. Their reunion is cut short by the horrifying discovery that Skandia’s borders have been breached by the Temujai army—and Araluen is next in their sights. Only an unlikely union can save the two kingdoms, but can it hold long enough to vanquish a ruthless new enemy?

Readers familiar with the Ranger’s Apprentice series will want to continue Will and Evanlyn’s epic journey through Skandia. The Battle for Skandia brings the four friends together—Halt, Horace, Evanlyn, and Will. In order to help the Skandians defeat the Temujai, Will and his friends join the fight. Unlike the previous books, The Battle for Skandia deals with strategy and tactics as Halt leads the Skandia forces in the fight against the Temujai army. Readers will learn more about the Skandiam’s traditions and bravery as their forces face the Temujai army. The contrast between the Araluens’ culture and the Skandian’s culture is interesting and sometimes humorous.

Unlike the previous books, The Battle for Skandia deals more with politics and preparation for battle, which slows the plot down. The story ends with a very long battle where many men die, including the leaders, the soldiers, and the slaves. Even though Evanlyn is a princess, she also helps to defeat the Temujai army. Throughout the story, the characters show the importance of loyalty and courage. The heartwarming conclusion holds some surprises. The Battle for Skandia highlights the importance of working together for the greater good. Although the story’s flow is choppy as it jumps back and forth between different characters’ perspectives, readers familiar with the series will want to know how Will and Evenlyn escape the dangerous threats that seem to lurk behind every corner.

“A good leader is someone who knows what he’s bad at, and hires someone who’s good at it to take care of it for him,” Halt. –The Battle for Scandia