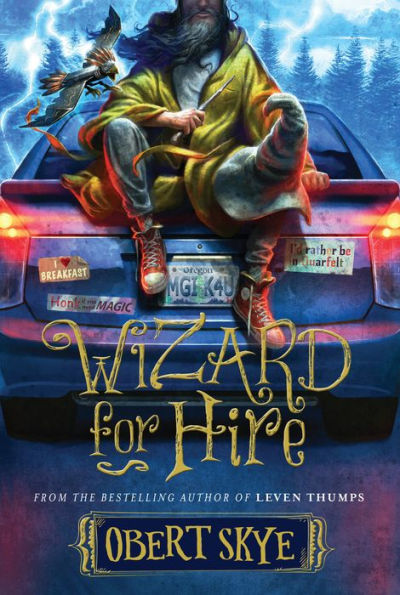 “The worst thing a person can do is to give space to regret. Why should the past have such crippling power?” Rin. —Wizard for Hire

When Ozzy was six years old, men took his parents. Since then, he’s lived alone. When Ozzy finds Clark, a robotic talking raven, the two venture into town. All Ozzy wants is to find his parents, but he’s not sure how a fourteen-year-old boy can discover the secrets to his parents’ disappearance.

Then Ozzy sees an advertisement: wizard for hire. Ozzy isn’t sure if wizards are real, but he’s read enough about Harry Potter that he has hope that wizards do exist. When Labyrinth “Rin” appears in his bathrobe and high-top tennis shoes, Ozzy has his doubts. Can Rin cast any magic spells and help him find his parents?

Wizard for Hire will cast a spell over readers, making it hard to put the book down. From the very first page, the story begins with an engaging mystery and a unique character that is easy to love. After living alone for so long, Ozzy struggles with how to talk to others, which is a dilemma many readers will relate to. The surprising appearance of a magical raven brings humor and heart into the story. Clark gives Ozzy encouragement, advice, and a reason to leave his small cabin. Clark’s crushes on metal objects add a fun element to the story.

Once Rin enters the story, Ozzy (and the reader) are both left questioning Rin’s wizardly abilities. Rin could be using magic or modern technology to help Ozzy, but the reader is left guessing about Rin’s magical ability. Rin casts a spell to make Ozzy invisible, which only works because the man is blind. Even though Rin may or may not be a wizard, he embarks on a quest to find Ozzy’s parents. As Rin and Ozzy investigate to find Ozzy’s missing parents, they must avoid the police who are looking for Ozzy, which adds suspense to the story. One additional bonus is Rin’s occasional words of wisdom. For example, when Ozzy is worried about his future, Rin tells him, “Too many of you humans are scared by ghosts that haven’t yet formed.”

Humor, heart, and Harry Potter references make Wizard for Hire a must-read. This coming-of-age story shows the importance of being unique and true to yourself. Although the ending isn’t a happy-every-after, Ozzy does find the answers to his questions. Although there is very little violence, some sensitive readers may be upset by the idea that Ozzy’s uncle was responsible for his parents’ deaths and, in the end, desires to kill Ozzy for greed and personal gain.

“The worst thing a person can do is to give space to regret. Why should the past have such crippling power?” Rin. —Wizard for Hire