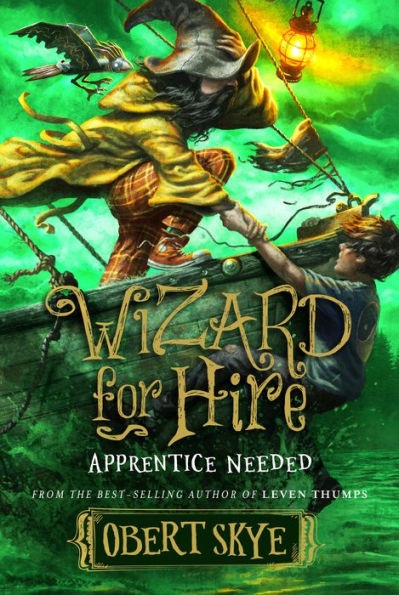 Ozzy Toffey has had enough adventure. But on a dark and windy night, he gets out of bed, jumps out of the window, and walks into the ocean. After almost drowning, Ozzy sure could use the help of Rin, the wizard he hired to help find his parents. But Rin is missing.

Then Ozzy receives an envelope with an airplane ticket to New York. Ozzy and his friend Sigi are convinced that Rin sent the tickets. The two set out on what they hope will be a quick trip to find Rin. Clark, the mechanical bird Ozzy’s father left him, has a hard time getting through airport security.

When Ozzy, Sigi, and Clark get to New York, they don’t find Rin. Instead, they find a rich and powerful man who wants to capture Ozzy. Will Rin appear and help save the day? Will Ozzy figure out why he keeps walking into the ocean?

The second installment of Wizard for Hire is full of action, adventure, and humor. Clark takes a bigger role in Apprentice Needed. Readers will laugh as Clark continues to fall for metal objects. His fascination with the mailbox, spoons and other metal objects is humorous, but it also highlights everyone’s need to feel appreciated. Everyone who reads Apprentice Needed will wish they had a metal bird like Clark.

The villain adds suspense to the story, in a way that is more humorous than scary. Readers will have a hard time not feeling sorry for the villain, who continually is outsmarted by two kids and a wizard. The wizard, Rin, may or may not be magical—much of the magic in the story is questionable. It’s not clear if Rin causes the weather that helps Ozzy and Sigi escape or if it was a coincidence. Plus, Rin finds magic in ordinary events, like an Uber showing up when needed.

As the story progresses, Ozzy learns the importance of letting go of things that he cannot control. Rin also teaches an important lesson about being careful with what you say. Rin says, “You may throw your words around callously, but they leave impressions on all who are struck.” Apprentice Needed has well-developed, interesting characters that readers will love. The pacing of the story leads to one suspenseful event after the other. Instead of ending the story with a satisfactory conclusion, the story ends with many unanswered questions. After reading Apprentice Needed, readers will be eagerly looking for the next book in the series.