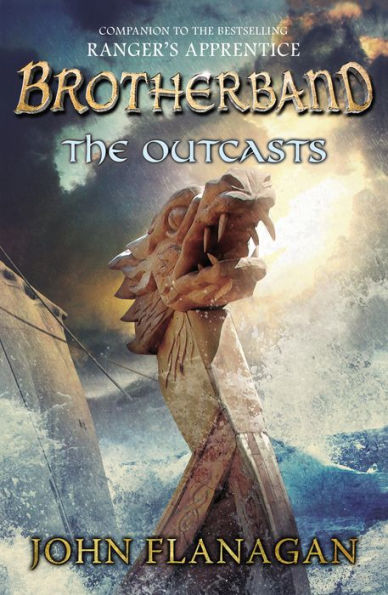 Hal never knew his father, a Skandian warrior. But unlike his esteemed father, Hal is an outcast. In a country that values physical strength over intellect, Hal’s ingenuity only serves to set him apart from the other boys his age. The one thing he has in common with his peers is Brotherband training. Forced to compete in tests of endurance and strength, Hal soon discovers he’s not the only outcast in this land of seafaring marauders—and that his battle for acceptance has just begun.

Hal and his best friend, Stig, have always felt like outsiders. People have looked down on Hal because he is half-Araluen, and they look down on Stig because his mother makes a living doing other people’s washing. When the two boys go to Brotherband training, Tursgud and Rolland choose their team members, and the eight boys who were not picked form the third Brotherband. Hal is chosen as the reluctant leader of the third Brotherband, the Herons.

As the three teams compete against each other, the Herons learn to help and rely on each other. While few people believe the Herons can be turned into warriors, Hal and his ragtag group find creative ways to defeat the other teams. Even though many of the Herons do not have physical prowess, each member of the Brotherband has an important role. Everyone—even a half-blind boy—can contribute. Through their experiences, readers will learn the importance of controlling their anger, working as a team, taking responsibility for their actions, and using their intelligence.

Middle school readers will relate to Hal and the other Herons as they fight to prove their worth. The story focuses on Hal, who is often criticized for his creative intelligence. However, it is this very intelligence that allows the Herons to win competitions. The Skandia society admires warriors who have strength, courage, and are not afraid of going to battle. These Skandian qualities allow the fast-paced story to have many exciting scenes as well as many descriptions of bullying and violence.

The connecting story arcs, difficult vocabulary, and huge cast of characters make The Outcast best for stronger readers. The conclusion connects all of the story arcs together and ends with a surprising twist. The Brotherband Series features several adults that also appear in the Ranger’s Apprentice Series. Despite this, readers do not need to read the Ranger’s Apprentice Series in order to understand the Brotherband Chronicles. Both series appeal to a wide audience because of the engaging plots, the likable characters, and the life lessons.