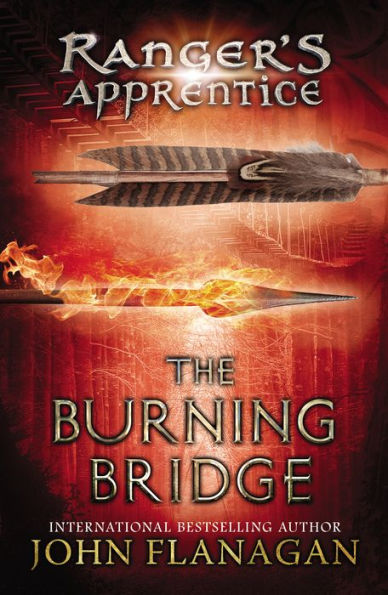 “Self-doubt is a disease. And if it gets out of control, it becomes self-fulfilling. You have to learn from what happened with those Wargals. Use the experience to make you stronger,” Gilan. –The Burning Bridge

For years, the Kingdom of Araluen has prospered, but everyone knows the evil Lord Morgarath is plotting the kingdom’s destruction. Lord Morgarath has been hiding safely behind the impassable mountains. He’s been patiently building his Wargal army, waiting for the perfect opportunity to strike.

When Will and his friend Horace, an apprentice knight, travel to a neighboring village, they find a frightened maiden named Evanlyn. The young woman miraculously survived a Wargal attack. As the three journey towards Araluen, they discover the unsettling truth. Morgarath has finally devised a plan to bring his legions over the mountains. Will, Horace, and Evanlyn must warn the king’s army of the imminent danger of being crushed. While the three are surrounded by Wargals and are running low on supplies, Will and Horace are determined to save the king’s army.

The Burning Bridge continues the story of Will, a Ranger’s apprentice, and Horace, a Battleschool student. As Araluen prepares for war, the two young men accompany Ranger Gilan as he journeys to the neighboring county to seek reinforcements. The companionship and respect between the group paint a vivid picture of friendship during medieval times. Despite their friendship, each man must do what is best for their country, even if that means leaving a friend behind. The story uses a third-person omniscient point of view to focus on Will and Horace’s thought process, which allows the reader to understand their actions.

Although Will and Horace are only apprentices, they play a vital role in saving the kingdom. The apprentices’ actions are realistic because their skills are constantly being improved as they travel with Gilan. Each character, no matter their station, has an important role in the kingdom. From the king to the cook, each person helps in the war efforts. Readers will enjoy the positive male relationships as well as the introduction of Evanlyn, who is determined to help her country.

The Burning Bridge is a story of war, friendship, and sacrifice. The descriptive battle scenes focus on the destruction of war and never glorifies the battle. Each person, including the king, loses someone they love. Although the sacrifices were necessary, each character feels the loss. Even though the death scenes are not described in gory detail, lives are lost.

The Burning Bridge has many positive aspects: well-developed characters, a believable setting, and realistic, exciting conflicts. The story’s long descriptive scenes and advanced vocabulary (such as traverse, caprice, incognito, incipient, vehemently, and emphatically) make the story best-suited for strong readers. The Ranger’s Apprentice Series must be read in order because the plot builds on the previous book. Those who have read The Ruins of Gorlan will also enjoy The Burning Bridge.

“Self-doubt is a disease. And if it gets out of control, it becomes self-fulfilling. You have to learn from what happened with those Wargals. Use the experience to make you stronger,” Gilan. –The Burning Bridge