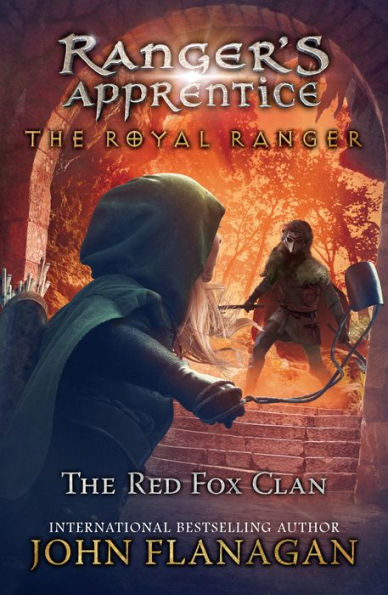 Picking up where The Royal Ranger: A New Beginning left off, this next installment continues the story featuring young apprentice Maddie and the student-turned-master, Will Treaty. The time has come for the next generation to assume the mantle and become protectors of the kingdom of Araluen.

After passing her third-year assessment as a ranger’s apprentice, Maddie is called home to Castle Araluen. Forced to keep her ranger training a secret, Maddie feels trapped by her role as a princess of the realm and longs to find a way out. But there are whisperings of a new threat to the kingdom. The mysterious Red Fox Clan, a group of anarchists who don fox masks, have threatened Castle Araluen, and they question Princess Cassandra and Madelyn’s succession to the throne. Will they unseat Cassandra and Madelyn and take the throne for themselves?

In order to set up the conflict, the book’s chapters alternate between different points of view —Madelyn’s, Horace’s, and Gilan’s. In addition, The Red Fox Clan introduces new characters and brings some characters from the Brotherband Series into Madelyn’s world. The introduction of characters and conflict slows the pacing because there is little action. However, readers who have already become fans of the Ranger’s Apprentice Series will enjoy seeing familiar characters from a different perspective.

Like all the Ranger’s Apprentice books, The Red Fox Clan ends with an epic battle. Even though the Araluen must fight the rebel Red Fox Clan, they do not kill for the fun of it. Several times in the battle, the Ranger Gilan has the opportunity to kill enemy fighters, but he chooses not to. After one fierce battle, the rebels begin to retreat and Gilan stops his men from shooting at the fleeing enemy. While men die, the story never glorifies killing others. Instead, Gilan chooses to show mercy to the enemy.

The start of The Red Fox Clan has little action or adventure; however, readers will be glad they continued reading because of the exciting conclusion. The conclusion does not resolve any of the story’s conflicts but instead ends with a cliffhanger. Readers will be eager to read the next book in the series, Duel at Araluen. Despite having 14 books in the original series, readers will find The Royal Ranger Series’ action isn’t stale and repetitious; instead, Maddie’s struggle varies enough that readers will still be guessing what will happen next. Readers who love action, adventure, and noble characters will enjoy The Royal Ranger Series.