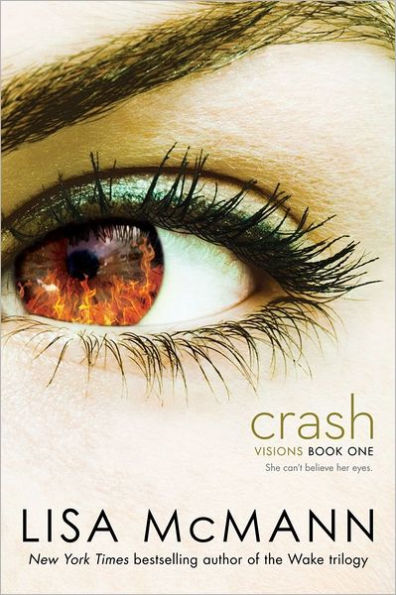 Jules wonders if she is going insane.  After all, she sees a truck smashing into a building, exploding, and then nine body bags in the snow.  And one of the bodies is that of her childhood friend, with who she is in love.  As the vision comes more frequently, life gets complicated. Jules can’t warn her friend because of a long-standing family rivalry.  And even if she did tell him about the visions, would he think she was crazy?  After all, that’s exactly what Jules wonders.

Crash is a fast-paced book that throws the reader into suspense from the beginning until the end.  The story is full of drama-family drama, school drama, and boy drama.  Jules doesn’t think she can trust her family with her fear about the visions so she lies and sneaks around.  And it turns out that secrecy is normal in her family; after all, her sister has a secret boyfriend, her father had a secret affair, and Jules secretly tries to figure out the meaning of her visions.

To add to the drama, Jules has been banned from taking to her childhood friend, who may end up in a body bag.  In order to save her friend, Jules is willing to do whatever it takes.

Crash is an entertaining mystery with lots of unexpected turns.  Jules is a likable character who is easy to relate to because her life is so messy.   Her relationship with her brother adds to the book’s enjoyment.

One downside of the book is the cursing, which is common throughout the book, both in dialogue and the character’s thoughts.  Although the book is entertaining, it also contains some heavy topics such as hoarding, depression, dishonesty, and homosexuality.  Although the topics are not discussed in detail, it is clear that Jules does not respect her father because of his depression and his hoarding.  Also, there are so many characters keeping secrets from each other that honesty seems to be a trait that is not highly valued.