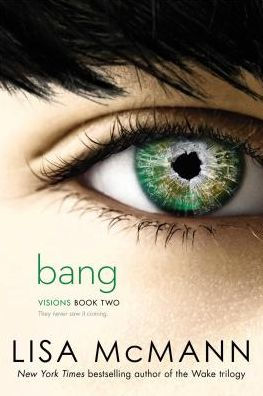 Fear:  that’s what Sawyer feels. And Jules can understand why. After all, she is the one who gave the vision curse to Sawyer.  Now Sawyer and Jules must decide if they are going to risk their lives trying to stop a tragedy.

Book II of the Visions series adds more involvement from Jule’s brother Trey.  Jules loves her brother, and it’s easy to see why.  He’s good-natured, loyal, and teases his sister about her love life. The relationship between Trey and his sister adds depth and delight to bang.  However, both Sawyer’s and Jules’ relationship with their parents is dysfunctional and full of distrust.  Sawyer’s grandfather hits him, in the past, his mother had an affair, and Sawyer lies to his parent so he can spend time with Jules and try to solve the mystery of the vision.

At the beginning of the book, the language is mild with words like “crap” and “friggin.’” However, it doesn’t take long until the cursing (and the make-out scenes) increase in frequency and intensity. Another troubling aspect of the book is Jules’ sisters’ romantic relationship. Her sister decides to fly to New York to stay with a boy she met at soccer camp, all without her parents knowing about the trip until she’s left.

bang loses a lot of the suspense that was contained in the first book, crash.  Instead of focusing on the mystery of the vision, bang delves into Jules’ relationship with Sawyer as well as their family relationships.  Although Jules cares deeply about her siblings, she is disrespectful and deceitful to her parents.  None of the characters consider confiding in the adults in their life.  Instead, Sawyer, Jules, and Trey band together to try to stop a tragedy from happening.