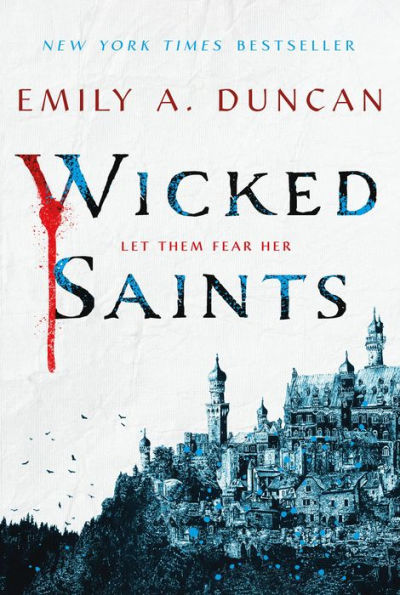 "I have had the gods chattering in my head my whole life. I’ve had this. . . this destiny hovering over me and I think the least I can ask for is the choice in how I see it into being,” Nadya. –Wicked Saints

Something Dark and Holy #1

by Emily A. Duncan

The war between gods-fearing Kalyazin and heretical Tranavia has gone on for a hundred years. The war began over differing views on the pantheon of gods that once ruled over the two countries: for Kalyazin, the gods are still meant to be revered and feared, while the Tranavia believe they are nothing more than myths or at the very least demons fooling the silly humans that worship them. While the gods and divine magic reign supreme in Kalyazin, blood magic takes hold of Tranavia.

Nadya Lapteva is the last Kalyazin cleric, the last of her kind able to speak with the gods and use their power. When her home is destroyed by Tranavia’s army, she makes it her mission to turn the tide of war and bring the gods back into the heart of Tranavia. Yet she can’t bring the gods back to a heretical country all on her own. Serefin Melesku, High Prince of Tranavia, may have been the one to destroy Nadya’s home and thrust her into a desperate decision, but he has his own part to play in Tranavia’s future. As a general on the war front, Serefin has become renowned for his magical prowess, highlighting his father’s weak abilities. But once the King calls Serefin home to choose a bride, he knows his father is up to something – something that could very well put him in mortal danger.

As Nadya and Serefin contend with the burdens placed on their shoulders, they get closer and closer to changing the world indefinitely. Magic swirls, monsters come out of the shadows, and neither mage will be able to stop what’s coming to shape the world.

Told from a first-person point of view from Nadya’s and Serefin’s separate journeys, the story explores themes of worship, religious skepticism, and hunger for power. Nadya and her companions are constantly debating whether the gods are worth the effort of worship and whether they’re truly gods. The idea of power revolves around this constant discussion; Nadya and Serefin question where their power comes from and why it’s even needed in the first place.

Both Nadya and Serefin are excellent main characters that carry the bulk of the story. Both are believable and relatable. They make decisions that will cause the reader to root for them during their journeys. The overall plot is full of action. While that action can often get bloody, it’s not overly complicated, and it’s full of discourse about the way religion and magic play into both countries. Religion and magic are tied to each other, and when the final twist of the story is revealed, it leads to a satisfying conclusion.

Kalyazin could be easily seen as a picturesque, pagan Russia with its more rigid religious culture. Tranavia could be viewed as inspired by the Polish warrior spirit that fights for its own power and glory. While the book is recommended for ages 13 and up, some younger readers may be disturbed by the many images of blood, whether that blood comes from violent fights or from the simple fact that mages in Tranavia use their own blood to use their magic. However, readers interested in religion and magic will find that Wicked Saints is a great story from start to finish.

"I have had the gods chattering in my head my whole life. I’ve had this. . . this destiny hovering over me and I think the least I can ask for is the choice in how I see it into being,” Nadya. –Wicked Saints