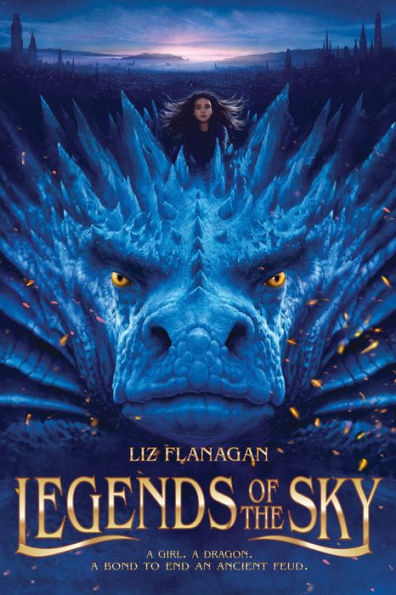 Legends of the Sky

Milla has heard the dragon legends. She has seen the dragon murals. But everyone says the dragons who used to rule the skies are gone forever.

Servant girl Milla witnesses a murder and finds herself caring for the last four dragon eggs. She tries to keep the eggs’ existence a secret, but soon, the eggs are in Duke Olvar’s possession. When the dragons hatch, Milla and her friends vow to stay with the dragons and protect them from harm. Milla and her friends try to learn how to care for their dragons, but it soon becomes clear that the dragons must belong to the city, not to the Duke.

Tensions in the city are growing due to Duke Olvar’s dislike of anyone who isn’t a Norlander, like him. The Duke wants to control the city and continues to put restrictions on those of Sartolans descent. In order to protect the Norlanders, the Duke decides that “anyone of Norlander descent got to wear a black dragon badge on their clothes—the Duke’s own symbol. Everyone else had to wear a badge in the shape of a ship, to show they were newly arrived.”

Flanagan builds a complicated island city that is under the Duke’s tight control. As Milla learns more about dragons, she also discovers that the Duke will do anything to bond with one. The Duke wants control of the dragons, so he keeps Milla, her three friends, and the dragons in the dragonhall. While under the Duke’s watchful eyes, Milla’s friendships begin to fracture.

Told from Milla’s point of view, readers will fall in love with Milla and her dragons. Milla is a complex character who struggles to do what is right. Milla struggles with her inability to help her Sartolans friends. Readers will understand Milla’s problems with her friends, her hope for the future, and her desire to keep her dragons safe.

Politics, deadly intrigue, and dragons combine to make a fast-paced story where danger hides in the shadows. The story’s complex plot and the violent conclusion make Legends of the Sky the perfect book for confident readers. With shifting loyalties, new friendships, and the struggle for power, The Legends of the Sky explores the topics of power, discrimination, and friendship. Through Milla’s point of view, the reader will come to understand that discrimination hurts everyone. Legends of the Sky is a beautifully written, action-packed story that will leave readers wanting a dragon of their own.