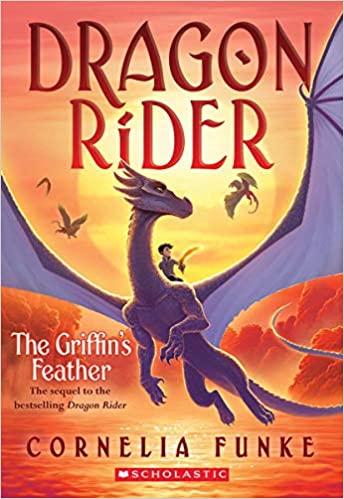 “Maybe we should choose our friends not by their species but by what their hearts are like,” Shrii. – The Griffin's Feather

Life is good for Ben, the dragon rider. Two years after the events of the first book, Dragon Rider, Ben is living in Norway with the Greenbloom family on a remote sanctuary for magical creatures. Firedrake, his dragon friend, is visiting. However, a problem arises when a male Pegasus, one of the last in the world, loses his mate and leaves three unborn Pegasus eggs behind. The magical care needed for them to hatch can only be provided by the mother, so the Greenbloom family rushes to find a solution to keep the foals alive: a griffin feather.

A griffin feather may provide the right magical touch to incubate the eggs, however, numerous problems arise. First, Griffins are fearsome predators and only exist in sparse numbers around the world. Second, the Greenblooms and their friends only have two weeks to convince a griffin to give up a sun feather, a rare feather that only grows after a griffin performs a great deed. Lastly, griffins are the sworn enemy of dragons, and Firedrake won’t be able to accompany Ben on the journey. The odds are stacked against them.

Though Ben is upset to journey without Firedrake, he decides to undertake the adventure with his adoptive father Professor Greenbloom, a troll named Hothbrodd, his old friend Lola, and his constant companion Twigleg. Before the group leaves, Firedrake gives Ben one of his scales as a parting gift, which will allow them to share emotions no matter how far away they are from one another.

The group travels to Indonesia, where Professor Greenbloom believes griffins live. They do find griffins, but to the group’s surprise, the island is embroiled in a griffin civil war headed by the island’s evil ruler Kraa, who is challenged by his nephew Shrii. Before the group can meet the infamous Kraa, Ben and the others are captured by monkeys. Sensing Ben’s distress, Firedrake, Sorrel, and a young dragon named Tattoo, travel to rescue their friends. Together, the group of adventurers defeats Kraa, restoring freedom to the island. Plus, they retrieve the griffin feather necessary to ensure the survival of the Pegasus foals.

The Dragon Rider Series is great for readers with an active imagination. The Griffin’s Feather is rich with fantasy elements and adventure. However, the number of relevant characters and magical creatures may be confusing. The back of the book has an index of the characters, but it is easy to get lost in the multitude of names and species.

Even if the series can be confusing, the willingness of the characters to extend love and care to others makes reading this story worthwhile. At one point, Ben thinks “revenge can even drown out love.” Firedrake has a similar thought when he is so angered that he has trouble suppressing his violent instincts. In addition, the final battle stands as a reminder to care for others, even when they may not deserve it.

The Griffin’s Feather unites the characters from the first installment with new friends who undertake a dangerous journey to save a threatened species. This story will leave readers with a strong desire to do what is right, as all the characters would gladly sacrifice themselves for the good of others and the world. Readers who want to jump into a realm where mystical creatures live should also enter the world of The Spiderwick Chronicles by Tony DiTerlizzi & Holly Black and Rise of the Dragon Moon by Gabrille K. Byrne. Both are excellent books that will be less confusing than the Dragon Rider Series.

“Maybe we should choose our friends not by their species but by what their hearts are like,” Shrii. – The Griffin's Feather