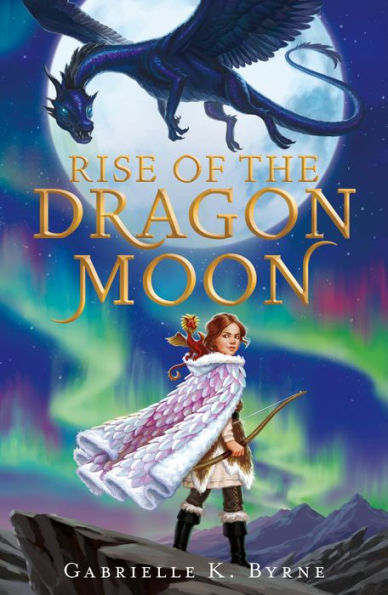 “Even terrible mistakes have roots and reasons. Making them doesn’t mean we get to give up,” Spar. –Rise of the Dragon Moon

Alone in a frozen world, Toli’s Queendom is at the mercy of the dragons who killed her father. She is certain it’s only a matter of time before they come back to destroy what’s left of her family. When the dragons rise and seize Toli’s mother, she will do anything to save her—even trust a young dragon who may be the key to the queen’s release.

With her sister and best friend at her side, Toli makes a treacherous journey across the vast ice barrens to Dragon Mountain, where long-held secrets await. Bear-cats are on their trail and dragons stalk them, but the greatest danger may prove to be a mystery buried in Toli’s past.

Readers will not want to start Rise of the Dragon Moon unless they have time to read the book in one sitting, because they will not be able to put the book down! Byrne builds a harsh, ice-covered world where dragons and humans are at odds. Right from the start, Toli’s conflict draws the reader into the story.

The story focuses on Toli, who is consumed with guilt about a secret she is keeping. Toli is a strong, determined character who doesn’t want to rely on others. While Toli is far from perfect, readers will admire her for her strength and willingness to put herself in danger to protect the people she loves. The story reinforces the idea that everyone makes mistakes, but “making them doesn’t mean we get to give up.”

Rise of the Dragon Moon is full of action and adventure and ends with an epic dragon battle. The well-developed characters are another positive aspect of the story. Readers will wish they had a friend like Wix, who was willing to fight bear-cats and dragons in order to help Toli. Although the dragons are not as well developed as the human characters, the main dragons all have unique personalities and ambitions which give the story added depth.

Throughout the story, one refrain is repeated several times—“The past was like the ice—it would never bend, but it would also never forget.” This phrase helps reinforce the idea that even though the past cannot be changed, the past does not need to define one’s future.

Besides being an incredible story, Rise of the Dragon Moon also shows the importance of trying to understand others—in this case, the dragons and humans must learn to communicate and work together to fight an unseen enemy. Even though the conclusion wraps up most of the story’s threads, Bryne leaves enough room for a possible sequel. Rise of the Dragon Moon will captivate readers with courageous characters who brave the danger of an icy wilderness in order to bring Toli’s mother home. Readers who love action, adventure, and dragons should also read Legends of the Sky by Liz Flanagan and Spark by Sarah Beth Durst.

“Even terrible mistakes have roots and reasons. Making them doesn’t mean we get to give up,” Spar. –Rise of the Dragon Moon