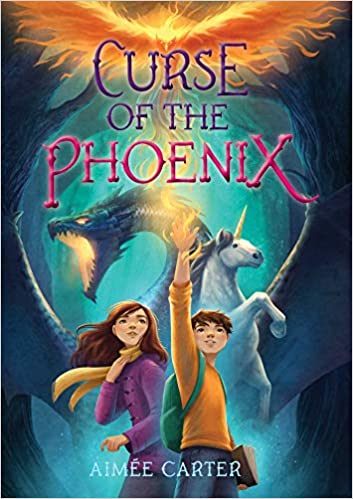 “Everything is wild here . . . Humans are the ones who don’t belong in the Wildewoods. It’s like—walking into a lion enclosure. That’s the animals’ territory, not yours. We’re just visiting,” Lu. – Curse of the Phoenix

Curse of the Phoenix

Fraternal twins Zac and Lu live rather estranged lives despite living in the same household. Zac is always indoors due to his asthma and severe allergies. Lu can go outside and hang out with her friends, yet feels burdened by her brother’s medical emergencies. The only thing they have in common is that they both grew up listening to their mother’s stories about the Wildewoods, an imaginary land where mythical beasts roam free. These creatures fill up the pages of Zac’s sketchbooks and inspire Lu’s love of animals.

When their mother dies, the twins are sent to England to spend the summer with relatives they’ve never met: their aunts Merle and Rowena, their uncle Conrad, and their cousins Penelope and Oliver. It doesn’t take long for the twins to discover the incredible secret hidden in the forest of their ancestral home. Their mother’s stories about centaurs, unicorns, and dragons were not made-up after all. Their family is the keepers of the Wildewoods, the last place on earth where mythical creatures can live safely away from human harm.

There are many dangers that lie in these lands—and a terrible curse. When Zac and Lu become victims of the curse, their only hope is tracking down the last living phoenix. On their search, they discover family secrets, learn about the magical creatures, and come to terms with their mother’s death.

The chapters alternate between Lu’s and Zac’s perspectives which gives insight into each twin’s point of view. Because Lu is more cautious than her brother, Lu’s perspective focuses on the danger of the Wildewoods and helps the reader understand the lay of the land as well as how the family cares for the creatures. On the other hand, Zac sees the mystique of the magical creatures and is less mindful of their inherent danger to humans. Some readers will relate to the responsibility of an older sibling, and other readers will relate to the joy of discovering and exploring a new place.

Zac and Lu stumble into danger whenever they venture into the lands and their relatives get hurt while fending off the mythical beasts that the twins stumble upon. For instance, their cousin Penelope fights a manticore to protect the twins but gets a lethal dose of the manticore’s venom, which incapacitates her for the rest of the summer. While the Wildewoods are scary and dangerous, they are portrayed as a traversable place for the family members to explore.

The Curse of the Phoenix is a fun, magical story that captures the magnificence of magical creatures and depicts the weight of the consequences of one’s actions. This novel has a quick pace, and it seamlessly integrates the Wildewoods into Zac and Lu’s new lives. Questions about the curse are answered early on, giving more chances for the main characters to explore the vast parts of the Wilde, the family’s estate. Throughout the story, the relatives allude to past events, giving the story a sense of mystery. Readers will eagerly flip pages to see if their predictions were correct. This is a must-read book for its unique perspective on humans and their relationships with magical creatures. Readers who like exciting adventures with intriguing mysteries will enjoy Aimée Carter’s Simon Thorn Series as well as Fablehaven by Brandon Mull.

“Everything is wild here . . . Humans are the ones who don’t belong in the Wildewoods. It’s like—walking into a lion enclosure. That’s the animals’ territory, not yours. We’re just visiting,” Lu. – Curse of the Phoenix