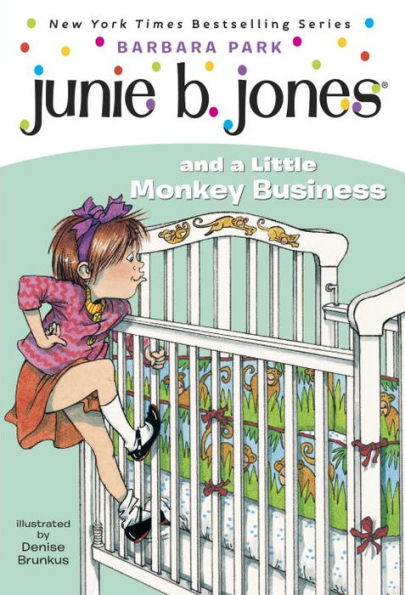 “Then that dumb Grace shot off her big fat mouth about her shoes. And so I got marched down here. And I had to sit in the bad kid’s chair.” Junie B. – Junie B. Jones and a Little Monkey Business

Junie B. Jones is not excited when her parents tell her they are having another baby. She is excited, however, when the baby is born and her grandmother describes him as “the cutest little monkey.” Junie B. goes to school and announces at Show & Tell that her brother is a monkey with long fingers and loads of black hair.

Trouble ensues when Junie B.’s friends both want to be the first to see Junie B.’s baby monkey brother. Junie B. manipulates both friends by giving vague promises so they will bribe her with gifts. Junie B. enjoys the attention and takes all of her friends’ things, until one of her friends begins to cry. When the confusion is aired out, Junie B. learns that sometimes adults say things that don’t make loads of sense to kids. Like “cutest little monkey” or “the bees’ knees.”

In the second book in the series, Junie B. is still a spoiled child with no respect for others’ boundaries. She shouts at people, she calls people dumb, and she does not listen well to her parents or teachers. Junie B. also ignores her friend’s hurt feelings. Even after taking all of her friend’s nice things (including her friend’s new shoes) and making her friend cry, Junie B.’s main thought is “and then that dumb Grace shot off her big fat mouth about her shoes.” When sent to the principal’s office, Junie B. fails to take any responsibility for her actions.

While Junie B. Jones is the main character in all of the Junie B. Jones books, readers do not need to read the books in order. Easy vocabulary and simple sentence structure make the story accessible to young readers. Black and white illustrations appear every five to ten pages and will help readers understand the plot.

While Junie B. Jones and Little Monkey Business will no doubt entertain young readers; the bigger question is whether parents want their children reading a story with a terrible role model. Unless Junie B. Jones starts learning kindness, empathy, and boundaries, this series’ entertainment value will fail to outweigh the life lessons that it imparts. Parents looking for a series with a positive role model should check out Diary of an Ice Princess by Christina Soontornvat and The Critter Club Series by Callie Barkley.

“Then that dumb Grace shot off her big fat mouth about her shoes. And so I got marched down here. And I had to sit in the bad kid’s chair.” Junie B. – Junie B. Jones and a Little Monkey Business