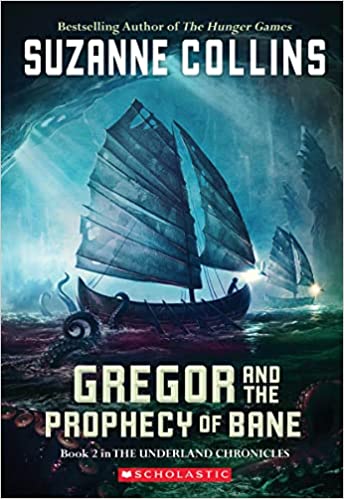 Other books by Suzanne Collins

Several months have passed since Gregor’s first trip to the Underland. Just as his life is returning to normal, his baby sister Boots is kidnapped by the cockroaches, and Gregor is forced to journey back to the subterranean city of Regalia. Once there, Gregor reunites with the rebellious Luxa and his bat Ares whom Gregor has pledged his loyalty and protection. Gregor soon discovers that the Underlanders have kidnapped Boots because of The Prophecy of Bane. This ancient prophecy implies that if Boots were to be killed, the rats would have the key to power.

The Underlanders believe that Gregor is the prophesied Warrior who must kill an evil rat cloaked in a coat of white: the Bane, an enormous, snow-white 10-foot rat that threatens to destroy Regalia and subject all of the Underland to his rule. The Prophecy of Bane mysteriously says that the Warrior will be fatally weakened if: “Die the baby die his heart, die his most essential part. Die the peace that rules the hour. Gnawers [another term for rats] have their key to power.” Believing that Boots is the baby spoken of in the prophecy, the rats kidnap her.

In order to save his sister, Gregor and his companions must embark upon a long and dangerous voyage, sailing into the heart of rat territory.  Gregor is determined to destroy the Bane before the rats can kill Boots. Gregor must learn to fight for those he loves while encountering dangers, close calls, and surprises along the journey. He must also discover what it means to be a warrior.

Those who read Gregor and the Prophecy of Bane will enjoy its simple yet engaging plot, its pulse-pounding action, and its variety of characters and settings. The character and mythos of the Underland are deepened in this worthy sequel. New and dangerous creatures are introduced, the uncharted, watery depths of the Underland are explored, and at the end of this long voyage lies a mysterious and powerful foe: the Bane.

Once readers enter the world of the Underland, the quick-moving plot and the dynamic characters will sweep middle school readers up, keeping their minds and imaginations engaged for the entirety of the book. To keep the suspense high, each new chapter introduces a new danger, an exciting development, and an intriguing complication to the plot. The action, often violent and bloody, is kicked up a notch from the first book. However, like the first book in the series, it is often the creatures and not the humans that suffer wounds and death in battle. Despite this, sensitive readers may be upset by the vivid battle descriptions.

Gregor and the Prophecy of Bane is rife with themes of familial love and sacrifice, compassion, friendship, and duty. Gregor will stop at nothing to protect his friends and family. However, Gregor is faced with many difficult situations and moral dilemmas, all of which develop his character. Gregor discovers that he possesses incredible powers as a fighter. In fact, whenever he is near or in the midst of battle, Gregor’s mind enters into “rager mode;” a “rager” is a gifted warrior who possesses fighting abilities that approach the supernatural. Throughout the book, Gregor must learn to harness and control these abilities, lest they control him. The danger of letting his violent, rager instincts overpower his kind nature forces Gregor to consider the nature of violence and how it should be used only to protect and defend.

Gregor and the Prophecy of Bane provides a story that is an incredibly entertaining blend of mystery, travel, and adventure. Every chapter ends on a cliff-hanger, providing ample reason for even the most reluctant of readers to devour it quickly. Furthermore, the ending perfectly sets up the sequel, Gregor and the Curse of the Warmbloods. Readers will not be able to help themselves, they’ll have to immediately reach for the next installment.

Other books by Suzanne Collins