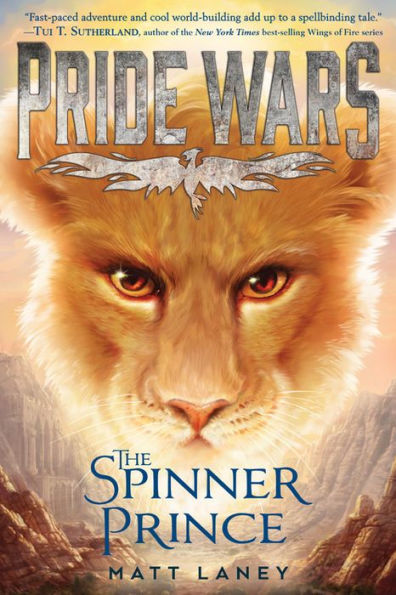 “Small minds are conquered by misfortunes; great minds rise above them,” Saying of the Ancients. –The Spinner Prince

Prince Leo is next in line for the throne of Singara, a land ruled by super-evolved felines. As a thirteen-year-old, Leo is small for his age. But like all thirteen-year-olds, Leo must prove his worth by hunting a deadly beast called a slaycon. If Leo kills the beast, he will still face many obstacles, including keeping his uncle from taking the thrown. Leo’s uncle will stop at nothing to gain power and control. And once he does, he will invade the neighboring pride.

In Singara, all fiction is outlawed and anyone who tells a story is exiled. Leo must hide the fact that he is a Spinner. Leo has been taught that, “Spinners are cursed with a dangerous disease officially known as the fiction affliction or story sickness, which causes them to spew fiction without warning.” When Leo tells stories, they come alive in visions. After Leo tells a story, one character is left behind. Leo can make the character disappear or he can bring them into his world. Each character wants to help Leo, but Leo just wants them to go away.

The future of Singara is in Leo’s hands. Can he conceal his curse, claim the throne, and protect his realm? Or will he embrace his power and discover a far greater destiny?

Leo’s adventure will take readers into an interesting world where felines consider fiction to be poisonous to the mind. The pride values strength, tradition, and science. Even though Leo’s grandfather has declared Leo the heir to the throne, some of the pride believe Leo’s uncle should be king because Leo’s father is unknown. Much like the Lion King, The Spinner Prince is a story about political unrest, friendship, and fighting evil.

Leo tells his own story which allows readers to understand his fears and concerns. While Leo has a good heart, he often makes unwise decisions. However, along the way, Leo learns the importance of relying on and trusting others. Each member of Leo’s group must work together if they are to succeed in stopping the war.

The Spinner Prince isn’t only a story about Leo. Because Leo is a Spinner, he often recites stories that are based on folktales from many cultures and traditions. However, readers who are familiar with the Bible will recognize the parallels. Each chapter begins with Sayings of the Ancients, which give a piece of wisdom, such as, “You make yourself by the choices you make.”

The Spinner Prince is full of action, intrigue, and interesting characters. Both Leo and the reader will wonder who can be trusted. Although the story is interesting, the complicated plot and large cast of characters make The Spinner Prince best for strong readers. As Leo learns untold truths, he will begin questioning his societies’ beliefs. A wise shepherd tells Leo, “It is hard to be a Spinner. It is much worse to hate yourself for it. We have been raised to view ourselves as afflicted instead of gifted, but that is just another lie we Singas tell.”

“Small minds are conquered by misfortunes; great minds rise above them,” Saying of the Ancients. –The Spinner Prince