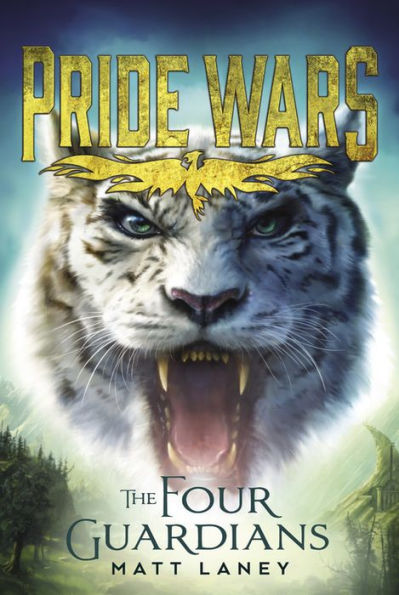 When Prince Leo’s devious cousin seizes control of Singara, Leo is forced to escape into enemy territory until he can return and claim the throne. Trapped among his enemies, Leo discovers they know a lot more about him than he knows about himself. With some guidance from unlikely allies, Leo is poised to fulfill a destiny greater than he ever imagined.

Can Leo harness his power, stop a war, and prevent a monstrous demon from escaping and destroying the world? In the second book of the Pride Wars series, Leo’s identity as a Spinner—once thought to be his greatest curse—may just become his greatest weapon.

When Leo flees Singara, he goes into enemy territory and learns about the neighboring Maguar tribe. The Four Guardians mixes fierce battles with scenes where Leo learns more about being a Spinner. With the help of a Maguar ally, Leo learns that he is a Shakyahs—a Spinner who is able to bring Jins to this world. While Leo hopes that the Maguar’s Shakyah, the Twelver, will help him stop the war, it soon becomes apparent that the Twelver’s one true desire is revenge.

Leo’s quadron joins him on his quest and are dedicated to keeping Leo safe, even if that means death. Once they make it to enemy territory, two spiritual guides help Leo understand what it means to be a Spinner. Unlike The Spinner Prince, the second book digs deeper into understanding the Maguar god, Alayah. The story highlights the importance of faith, and readers will recognize areas that are similar to the Bible. As one character says, “Yet faith is the most basic thing there is. Faith is the crying of a cub for its mother. Faith is one candle in overwhelming darkness. Faith is the light of Alayah in every living thing. Every breath, and every step we take, is an act of faith.”

The Four Guardians battles are fierce and may frighten some readers. The Maguar Shakyah, the Twelver, only has one true desire, which is to kill the demon Hasatamara. However, this desire has made the Twelver a truly evil enemy who is willing to bring death to anyone who opposes her. Unlike the Twelver, Leo’s journey is based on the desire to save lives and bring both tribes together. That is why Alayah praises Leo for showing “humility, bravery, and compassion, even toward your enemies.”

The action-packed sequel, The Four Guardians, allows the reader to step into an imaginative world that has clear villains. While the story has some surprises, the long explanations of Spinners and Alayah slow down the plot. In the fight against good and evil, Leo is an imperfect character who relies on his friends to guide him. Readers will enjoy the relationship between Leo and his friends and celebrate their wins. The complicated plot, large cast of characters, and spiritual content make The Four Guardians better suited for strong readers. The Four Guardians doesn’t resolve any conflicts, but leaves room for another sequel.