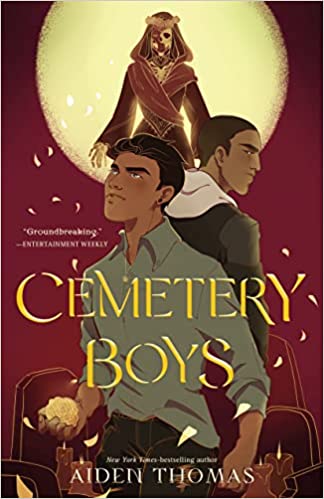 “There were still more obstacles to overcome and battles to fight, but Yadriel wouldn’t feel alone in it anymore,” Yadriel. –Cemetery Boys

Sixteen-year-old Yadriel’s family doesn’t accept his true gender. Despite this, he’s determined to prove to his family that he is a real brujo. Yardriel embarks on a mission to help a spirit cross over to the land of the dead. However, instead of summoning his cousin, Yadriel summons the ghost of his school’s bad boy, Julian Diaz.

Julian agrees to let Yadriel release his spirit, but only after Julian does a few things first. During their time together, the pair grow closer and begin to develop feelings for each other. However, Yadriel, Julian, and his friend, Maritza, slowly begin to realize that Julian’s death might be linked with a series of disappearances across East LA. What could be causing them? Will Yadriel’s family ever fully accept him? And will Yadriel be able to set Julian’s spirit free to the afterlife?

Cemetery Boys is an excellent introduction to the genre of magical realism mixed with a sweet and genuine, if somewhat saccharine, YA love story. The fantastical elements of brujo magic remain consistent throughout the story and helps the reader clearly understand what can be accomplished by magic, but the realistic elements are where Thomas’s writing truly shines. They convey a down-to-earth story of a young man seeking acceptance from his traditional family. In addition, the author interweaves several problems that Latinx teenagers face in East LA.

Julian discusses how his friend, Luca, was sucked into a gang. Julian and his friends “didn’t see [Luca] for weeks and his parents didn’t care . . . By the time we tracked him down, he was living in a drug den and had gotten branded with tattoos.” Julian also talks about how his friend’s parents were deported. His friend was “the only one who’s got parents that actually like him . . . But they got deported . . . They sacrificed everything to get to the US and make sure Omar had a better life than them.” In addition, Julian is incredibly open about his rough relationship with his brother, Rio.

Thomas excellently disperses the more upsetting material among scenes of Yadriel and Julian growing closer. The pair go on an Odyssey of cute moments and teenage shenanigans, which makes them and their relationship both believable and sweet. Because of their relationships, Yadriel gains confidence and learns the importance of accepting himself.

Yadriel and his friends—Julian, and Maritza—are strong role models for teenagers because they do what they believe is right, even if it is not easy or socially acceptable. For example, Yadriel goes against his family’s wishes by investigating the death of his cousin. Maritza sticks to her values as a vegan even though she cannot use her magic abilities effectively, since her healing abilities depend on her using animal blood. Plus, Julian chooses to stay in the land of the living in order to help Yadriel prove himself as a brujo.

Cemetery Boys is deeply rooted within Latin American culture, especially through its supernatural elements. Latin American folktales are also sprinkled throughout the story. Additionally, a lot of Spanish is spoken within the book, especially when Yadriel performs magic. While this novel can be easily enjoyed without being bilingual, having some knowledge of both Latin American culture and the Spanish language enhances the reading experience.

Thomas successfully creates a story within the genre of magical realism that is both heart-wrenching and heartwarming. If your child is interested in urban fantasy or wants to read a book featuring diverse LGBTQ+ characters, Cemetery Boys is an excellent choice.

“There were still more obstacles to overcome and battles to fight, but Yadriel wouldn’t feel alone in it anymore,” Yadriel. –Cemetery Boys