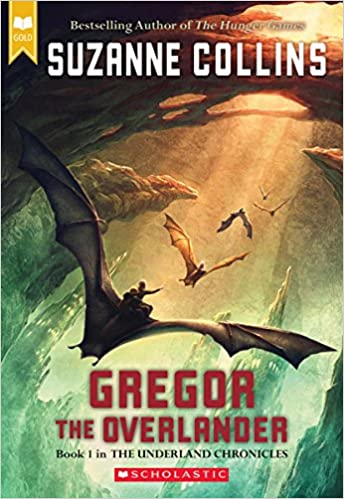 “It was Gregor the rats wanted…He was the one who had to decide where he stood. And it wasn’t going to be here, watching people he loved die. He was the warrior, and the warrior saved people,” Gregor. —Gregor the Overlander

When eleven-year-old Gregor and his two-year-old sister, Boots, fall down an air duct in their laundry room, they find themselves in Underland: an underground world that has remained hidden from the surface dwellers for centuries. Underland is populated by the friendly but fierce Underlanders, who live in the underground city of Regalia. However, Underlanders are not the only ones who live in the dark. Giant, talking animals inhabit this strange place: enormous bats, upon whom the Underlanders ride and fly, cockroaches, spiders, and worst of all, rats.

The rats are the sworn enemies of the people of Regalia and when Gregor arrives, word begins to spread that he may be the warrior spoken of in an ancient Underland prophecy; a warrior who will save Regalia from the rats. Gregor, however, just wants to find his father, who’s been missing for over two years and may be lost somewhere in Underland. On his quest to recover his father, Gregor learns many important lessons about courage, friendship, and perseverance.

Those who read Gregor the Overlander will enjoy its unrelentingly quick pace and action. The peculiar and intriguing world of Underland, the fantastical and dangerous creatures, the mysterious “Prophecy of Gray,” and the hunt for a boy’s lost father are sure to hook the reader for the entirety of the story. The action, while violent and bloody, is not gory. Often, giant bugs or animals are wounded and killed in battle, which some may find more palatable than human violence.

The story is rife with themes that are important for every child to explore, such as family, friendship, sacrifice, courage, and empathy. Throughout the book, Gregor is unceasingly loving, kind, and protective of his little sister, and in the darkest moments of his quest, Gregor finds strength and hope in the thought of reuniting with his father. Gregor is not a perfect character though; he often finds himself losing his temper and judging others too quickly, like the cockroaches Tick and Temp. However, Gregor learns that these humble creatures possess virtues of their own and are deserving of respect and dignity. Gregor also frequently butts heads with two young Underlanders (who also happen to be royalty in Regalia), Luxa and Henry. However, after Luxa rescues Gregor and vice versa the two begin to trust and respect one another, planting the seeds of friendship.

Throughout the story, Gregor expresses doubt that he is in fact the warrior spoken of in the Prophecy of Gray. However, he continually demonstrates courage in the face of danger, surprising both himself and the Underlanders. In the end, Gregor finds that he is willing to sacrifice himself for his friends. Throughout the story, Gregor develops into a courageous, yet thoughtful young man. Though the story is self-contained, it also sets up the sequel, Gregor and the Prophecy of Bane, quite nicely.

Gregor the Overlander’s unique blend of fantasy, mystery, and adventure combine to create a story that is sure to entice and delight young readers. Plus, readers will find it easy to identify with Gregor and imagine how they would react to the challenges he faces. The fast-paced story with its unique world, its pulse-pounding action, and its compelling characters ensure that readers won’t want to put it down until they’ve finished, after which they’ll quickly reach for the next one, Gregor and the Prophecy of Bane.

“It was Gregor the rats wanted…He was the one who had to decide where he stood. And it wasn’t going to be here, watching people he loved die. He was the warrior, and the warrior saved people,” Gregor. —Gregor the Overlander