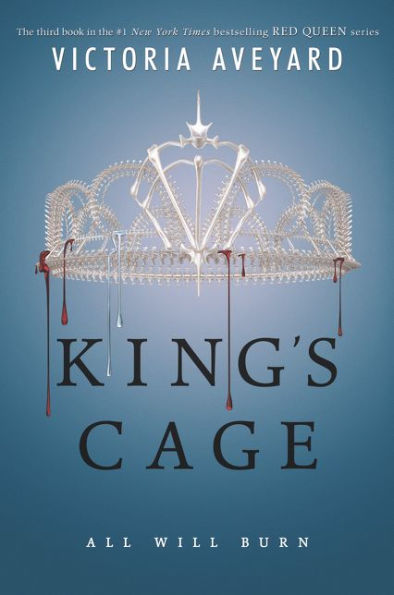 After completing her mission to secure an army of newbloods, Mare Barrow finds herself once again trapped in the royal palace of Norta. She’s become King Maven’s pet, forced to play a dangerous role at his side. Her forced words carry weight with the Reds, and create schisms in the Scarlet Guard and Norta as a whole.

Without Mare, the Guard has trouble accepting both the newbloods and Silvers into their ranks. Cameron Cole, a newblood herself, knows exactly what it’s like to be ostracized for her ability. After seeing Mare struggle to control her ability, Cameron fears becoming like her; yet, she’s not alone in the struggle. Farley, a new commander of the Scarlet Guard, continues to fight after losing her lover, Shade. Kilorn, Mare’s best friend, must decide whether to continue fighting or focus on protecting Mare’s family. Cal must figure out what side he will choose. Will he be able to continue to kill his Silver comrades, or will he betray the Scarlet Guard?

But just as loyalties are tested in the Scarlet Guard, so are they in Maven’s court. Evangeline Samos, now betrothed to Maven as the future queen of Norta, wants nothing more than to rule. When noble houses begin to betray Maven left and right, navigating the palace becomes more complicated. Will Evangeline get to rule Norta? Will Cameron and the Scarlet Guard prove too much for the Silvers to handle? Will Mare be able to change Maven for the better and abolish the monarchy?

As the third installment of the Red Queen Series, King’s Cage is an excellent continuation of the story because Mare is back in the thick of political intrigue. She’s right there to see the complicated and unique relationships between the Silvers, allowing the reader to see both sides of the power struggle.

The plot is a roller-coaster of twists and suspense, leading Mare, Cameron, and Evangeline through many life-changing and life-threatening moments. The three main heroines are fascinating to follow because each one is constantly on the edge of danger. For instance, Mare has gotten over her selfish and arrogant nature, but now struggles to stay at Maven’s side. Mare is forced to pretend that she betrayed the Scarlet Guard, yet she manages to stay sane enough to secretly gather intel. Cameron struggles with the fear of turning into a monster. And Evangeline must find a way to rule over Norta without becoming Maven’s bride.

The theme of betrayal is once again central to the plot, as characters and noble houses backstab each other left and right. The action scenes are the best yet with each heroine battling individually at first, but then all coming together in a big battle at the end. The buildup and suspense work well as Mare’s, Cameron’s, and Evangeline’s stories intertwine. Overall, King’s Cage is a great follow-up to a lackluster sequel. The story will conclude in the final book, War Storm, where readers will find out whether Mare will triumph over King Maven.