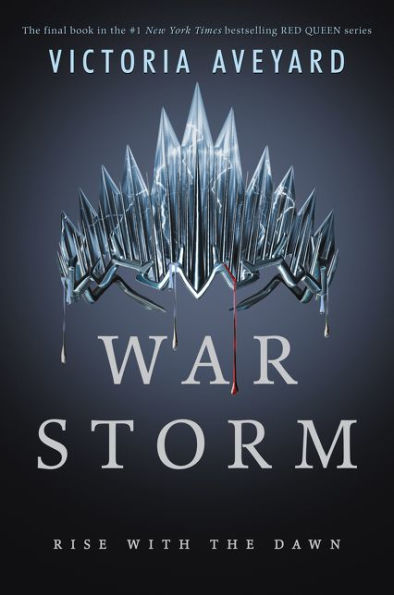 “They are Red. They are lesser. And they are happy. How can this be?” Evangeline.  —War Storm

In the splintered Kingdom of Norta, freedom for Reds and newbloods is closer than ever before. Torn between the two princes and the feuding noble Silver Houses, Norta is ripe for the taking. All the Scarlet Guard has to do is clean up the mess Maven Calore made, and create the type of nation that will never discriminate against Reds and newbloods. The first step is to rip the crown from Maven’s head.

In order to change the world, Mare Barrow must ally with Cal, the boy who chose the crown over her. Cal’s betrayal nearly broke Mare, but now she must fight alongside him if she wants any chance at winning freedom. If she doesn’t, Maven will surely overrun them all, and capture her for himself. Maven’s obsession with Mare runs deep, and he’ll stop at nothing to have her again.

For the Reds to rise, they must first go through a war storm. Scurrying from nation to nation and striking deep into the heart of Norta is only the beginning, and there are endless battles in sight. Are Mare and the Scarlet Guard willing to sacrifice everything to achieve the impossible? Or will Maven crush them and their dreams?

War Storm is the final entry in Aveyard’s Red Queen Series, and the story will not disappoint readers. As Mare and the Scarlet Guard are about to secure a future for themselves, they fight intense battles. The action-packed series features different combinations of Silver and newblood abilities, which makes every battle feel unique and fresh. Readers will love how each battle plays out differently than the last.

Of course, all those battles support the theme of war, as nearly the entire continent gets dragged into the civil war between Cal and his brother, Maven. Maven brokers alliances with the powerful nation of the Lakelands, as well as the smaller nation of Piedmont. While Cal allies with the free country of Montfort, the only nation known that allows equality for Reds, newbloods, and Silvers.

The characters in War Storm are strong and interesting. Mare has grown into a girl that’s strong enough to handle whatever is thrown at her. Another fascinating character is Evangeline Samos, Mare’s former enemy, who begins the long journey to overcome her Silver-born prejudices. These strong characters will keep readers on the edge of their seats. While not every main character gets the most satisfying ending to their arc, the ending ties up most of the loose ends and will leave readers happy. Warm Storm is a satisfying conclusion to Aveyard’s Red Queen Series.

“They are Red. They are lesser. And they are happy. How can this be?” Evangeline.  —War Storm